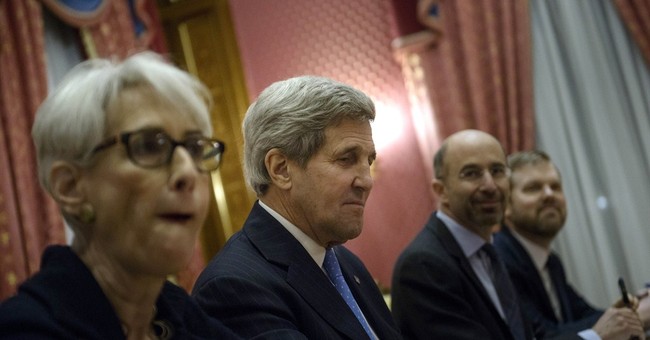 The March 31 deadline for a deal on Iran’s nuclear program is approaching, and the best the parties involved could do in 18 months is draft an outline, according to Reuters. Mohammad Javad Zarif tweeted that all sides involved have exhibited “flexibility,” but the divides are still deep amongst the negotiating parties. Politico cited British Foreign Secretary Philip Hammond saying a deal with Iran would be a “vague, unwritten” agreement. The White House even admitted that the deal probably won't be in writing. Additionally, the United States says it has put the burden of compromise on the Iranians. The Iranians made it clear that the last few hurdles in this developing deal isn’t just for them to resolve alone (via CNN):

“We have come here with very clear decisions that we have made, and we have expectations that our partners also would be deciding likewise on the key issues," said Hamid Baeedinejad, a senior member of the Iranian delegation. "Now basically it is out [sic] partners that should makes those tough decisions that are necessary for concluding this part of the negotiations."

The Hill has a pretty good rundown of the talks that began 18 months ago. The United States, United Kingdom, France, Germany, China, and Russia (P5+1) want Iran to accept caveats to their nuclear program in return for lifting sanctions that have damaged its economy. Iran says the program is for civilian purposes, the other nations think that it’s for building nuclear weapons. Iran would agree to a 10-year freeze to their program if sanctions were lifted immediately; Ayatollah “Death to America” Ali Khameni has agreed to this if the latter is honored. Yet, the other nations want a gradual lifting of the sanctions.

Here are the things to consider:

But Western nations want sanctions relief to happen slowly. Sanctions are the greatest leverage they have in the negotiations, and experts believe once they are lifted, it won’t be easy to reimpose them if Iran violates terms of the agreement.

Undoing the complex system of sanctions will not be easy. President Obama has the power to lift a limited number of sanctions on Iran on his own. But an act of Congress would be required to lift all of them.

In addition, there are United Nations and European Union sanctions that would need to be waived.

The inspections would last indefinitely, even after the restrictions on Iran’s nuclear activity expire, national security adviser Susan Rice said earlier this month.

But critics of the deal fear that the inspections are a toothless method to ensure Iran does not build a bomb. In the past, Iran has refused to allow inspectors to examine its nuclear sites.

As Guy mentioned, the U.S. is considering allowing Iran to maintain centrifuges in an underground bunker, which wasn’t the original P5+1 position:

A draft version of the deal obtained by the Associated Press last week would limit Iran to 6,000 centrifuges, the machines that produce enriched uranium, at its main enrichment site at Natanz.

In addition, the U.S. is considering allowing Iran to operate hundreds more at a fortified, underground bunker at Fordo as long as they are not used to enrich uranium, according to the AP. The P5+1 nations initially wanted all centrifuges eliminated from that facility.

We shall see what happens next week, but House Speaker John Boehner isn’t optimistic about the outcome of these negotiations, and said that Congress will move “very” quickly to impose new sanctions on Iran if things fall through:

"I just don't understand why we would sign an agreement with a group of people who, in my opinion, have no intention of keeping their word," Boehner said.

Asked how quickly the House would move to further sanctions against Iran if no deal is reached, Boehner responded: "Very."

Boehner is set to travel to Israel this week, where Prime Minister Benjamin Netanyahu, who's been skeptical of the Iran nuclear negotiations, just won re-election.

As Conn wrote earlier last week, the Obama administration has caved to a multitude of Iranian demands, which has some scratching their heads as to who has leverage in these talks; Obama or Iran?

Over the past week alone, U.S. negotiators reportedly have conceded to Iran: 1) the need for a written agreement; 2) the ability of Iran to use nuclear centrifuges underground; and 3) the need for Iran to disclose the full range of its current nuclear capabilities.

Obama's Middle East strategy is premised on "transforming" the current Iranian government by ending sanctions on Iran. This means that Obama wants the sanctions on Iran lifted just as badly as Ayatollah Khamenei.

Who has a better understanding of Iran, its politics, its people, and the impact of ending economic sanctions? Is it Khamenei, who has ruled his country for over two decades? Or is it Obama, who honestly thought the power of his own celebrity could save Democrats from crushing defeat in 2010? We'll see.

The answer to that question is ultimately irrelevant though when judging who currently has more leverage in the nuclear weapons talks. Since both Obama and Iran want sanctions on Iran to be lifted, Obama has no way to force any real concessions from Iran on nuclear issues. His threat to continue the current sanctions, or enact new ones, are hollow. Everyone knows he wants the sanctions lifted anyway. Why should Iran concede anything?

That's why they are not.

Obama has cleared his schedule next week in preparation of a deal.

Over at the New York Times, Ross Douthat elaborates more on Obama’s mess in the Middle East:

This administration has been persistently surprised by Middle East developments, and its self-justifications alternate between the exasperated (why don’t you try it if you’re so smart?) and the delusional (as soon as we get the Iran deal, game changer, baby!).

In a Pax Americana system, the United States enjoys a dominant position within a network of allies and clients; actors outside that network are considered rogues and threats, to be restrained and coerced by our overwhelming military might. Ideally, over time our clients become more prosperous and more democratic, the benefits of joining the network become obvious, and the military canopy both expands and becomes less necessary.

Our withdrawal from Iraq and light-footprint approach to counterterrorism, our strange dance with Bashar al-Assad, our limited intervention against ISIS — they all aim at a more “offshore” approach to the Middle East’s problems. Likewise, the long-sought détente with Iran, which assumes that once the nuclear issue is resolved, Tehran can gradually join Riyadh, Cairo and Tel Aviv in a multipolar order.

There are two problems. First, offshore balancing offers the most benefits when your entanglements are truly minimal, but it’s very hard for a hegemon to simply sidle offstage, shedding expectations and leaving allies in the lurch. And when you’re still effectively involved everywhere, trying to tip the balance of power this way and that with occasional airstrikes, it’s easy to end up in a contradictory, six-degrees-of-enmity scenario, with no clear goal in mind.

Second, multipolar environments are often more unstable and violent, period, than unipolar ones.

But in the world as it exists, what we have is an administration that wants to believe it’s getting us out, but a region that’s inexorably, inevitably pulling us back in.

Adding to the sentiment is the fact that Saudi Arabia, Turkey,and–at the time–Mubarak's Egypt would probably start their own nuclear weapons programs if Iran gets the bomb. This means the collapse the Nuclear Nonproliferation Treaty and a renewed arms race in ISIS' neighborhood. That's frightening.