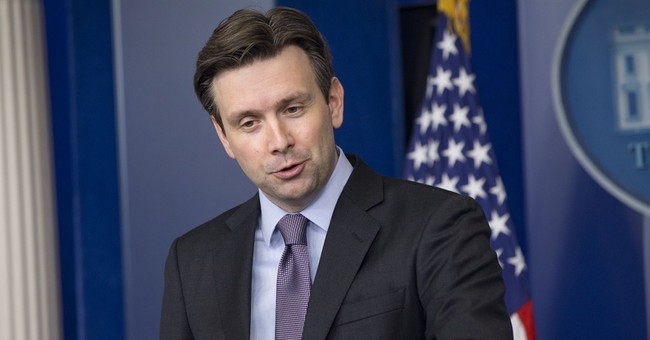 Following a New York Times story reporting that Iran would not sign any document by the end of March, ABC News White House correspondent Jon Karl pointedly asked Earnest if Obama would settle for an oral agreement instead. Earnest evaded:

Well, Jon, when the President was asked to talk about our ongoing efforts to reach a diplomatic political agreement with the Iranians before the end of March, the President made reference to the fact that we would see and that we, meaning the American people and Congress, would be able to take a close look at the terms of that agreement.

Now, the terms of that agreement are going to be -- it’s a political agreement, right, so they’re making certain commitments to do certain things. The details of those commitments are extraordinarily important and there will be a process for hammering out those details. But the President was clear that the kinds of commitments that we seek from the Iranians are the kinds of things that we would be able to show to members of Congress and show publicly to share with our allies, including Israel, about what kind of commitments Iran has made.

So I don’t want to prejudge the process here at all, or to prejudge sort of the outcome of the talks because there’s the chance that a deal is not reached. But we certainly would want and expect that if a deal is completed, it will include tangible, specific commitments that have been made by the Iranians.

Karl then asked, "I’m just trying to understand what tangible means," to which Earnest responded, "And what I’m saying is that you can -- that as we move through this process of negotiating with the Iranians and our P5+1 partners, we hope to be able to elicit tangible commitments that the Iranians have made that we can then share with our P5+1 partners, with our allies, and with the United States Congress, all of whom have a legitimate claim to understand exactly what kind of commitments Iran has made in this process, if they make them."

That was three direct chances Earnest was given to confirm that any nuclear agreement with Iran would have to be signed, in writing, and three clear non-answers from Earnest.

So don't be surprised next week when Obama claims to have secured "tangible commitments" from Iran on their nuclear weapons program but is also unable to provide any document with Iran's signature on it.