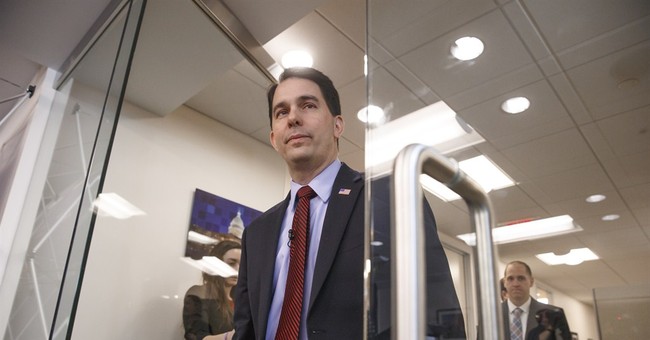 Rape on America’s college campuses is one of the many issues that get the feminist left into a frenzy. That’s not to say that sexual assault isn't a serious issue–it is. But, the data is shoddy, and there is a case to be made that the new guidelines in combating rape on campus is an infringement on the rights of men in America.

Yet, since it’s one of the issues that animates the progressive base of the liberal America, what better way to strike at Gov. Scott Walker–a possible 2016 presidential candidate–by trying to say he wants colleges to stop reporting rape. There’s only one problem: it isn’t true.

Yesterday, the lefty-feminist site Jezebel reported that the governor had included this new policy in his proposed budget this year:

There are no policy recommendations in Walker's budget how or what would replace these reporting mechanisms. The Governor simply instructs that they should be deleted.

As the election cycle drags on you will be able to tick off the boxes on Scott Walker's CONSERVATIVE STRONG MAN card. Count this as the first of many boxes.

The Daily Beast described the language as “shocking,” reporting that the state’s attorney general had reservations about the proposal, and even spoke with University of Wisconsin students about this phantom issue:

One of the state universities, the University of Wisconsin at Whitewater, is already being investigated by the Department of Education for violating Title IX with its failure to investigate and respond to campus sexual assault.

Furthermore, even Republican Wisconsin Attorney General Brad Schimel has expressed reservations about Walker’s proposal. His office told The Daily Beast in a statement that the Attorney General “is concerned about some of the provisions in the budget that may reduce information provided to college students and take away reporting requirements. He will work with representatives from UW and the Governor’s office to determine what prompted these changes and to ensure that we provide all of the protection we reasonably can for our college students.”

Regardless of whether Walker’s proposal will eventually take effect, both male and female students the University of Wisconsin-Madison, the flagship institution of the state—are already disappointed and concerned.

“Deleting any form of mandatory sexual assault reporting can only open up cracks for information to slip through, or allow for a cloak of ambiguity,” Oliver said in an email to The Daily Beast. “In a time when sexual assault on campus is such a painful and prevalent issue, we need way more clarity and responsibility at all levels—university, state, and federal—not less.”

Well, actually, it was the University of Wisconsin that asked Walker to remove the redundant provision since they’re already required under federal law (Clery Act) to report rapes on their campus (via AP):

The University of Wisconsin requested that Gov. Scott Walker remove a requirement that all 26 campuses report allegations of sexual assaults to the state every year because it already submits similar information to the federal government, a UW spokesman said Friday.

The proposal to delete the annual reports to the state Department of Justice is among dozens of requirements that would be removed as part of Walker’s plan to decouple the university from most state laws and state oversight. Though the budget proposal came out earlier this month, the sex assault request was explained in a summary released Thursday by the nonpartisan Legislative Fiscal Bureau.

UW System spokesman Alex Hummel said Friday that the university requested the change because information given to the state is duplicative of data required to be reported to the U.S. Department of Education under federal law. The university also posts the information on its website.

Oh, and the draconian $300 million dollar cut is about 2.5 percent of the university system’s entire budget. Again, this is another attempt to derail Gov. Walker’s potential 2016 ambitions. The university system asked Walker to remove the provision, there is no issue with Title IX, and there is no “legal line” that is in danger of being crossed.