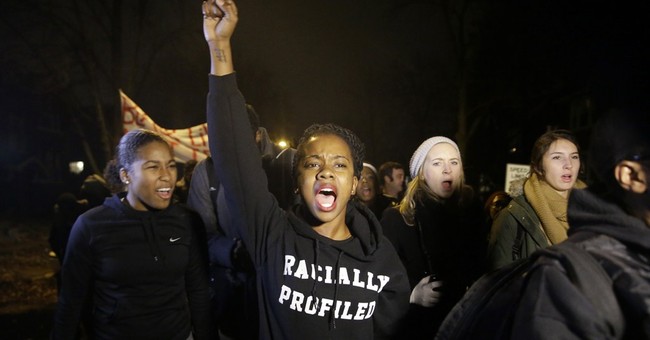 It has arrived. The Ferguson grand jury has finally reached a decision over whether any criminal charges will be filed against Officer Darren Wilson who was involved in the shooting death of Michael Brown last summer; Brown’s death spurred days of protests and a renewed discussion about race relations.

Some schools in Ferguson have been closed, police have set up barricades and a command center, and Gov. Jay Nixon recently declared a state of emergency (via USA Today):

Some Ferguson, Mo., schools were closed, a police command center was in place and barriers have been set up to help control protests near the courthouse in St. Louis and in downtown Ferguson, a suburb of the city.

Police officials and protest organizers have collaborated on rules of engagement. Gov. Jay Nixon has declared a state of emergency and activated the state's National Guard.

The evidence brought before the grand jury may not reach the public for some time, if at all. If Wilson is indicted, evidence presented to the grand jury would not be released because it would be used during the trial. And St. Louis County Director of Judicial Administration Paul Fox released a statement Sunday denying that Judge Carolyn Whittington had agreed to release the information if Wilson is not indicted.

Whatever the grand jury decision, authorities say they want to avoid repetition of the chaos that followed the Aug. 9 shooting, when some protests turned into violent, ugly clashes with police.

Yet, Gov. Nixon wasn’t entirely sure who was in charge of responding when it comes to protestors.

CNN reported last week that while the grand jury was deliberating, Officer Darren Wilson was considering resigning from the police force, but he could change his mind if the grand jury brings charges against him.

The grand jury is made up of nine men and five women; nine are white, three are black.

Nine of the 12 jurors must agree whether to indict Officer Wilson or not.

We will keep you updated.

UPDATE: Jurors from the grand jury have been released.

I am urging calm. I’m urging calm for the police officers to not pepper spray me, tear gas me, mace me and shoot rubber bullets. People need to urge the police to be calm. Stop hurting kids, stop traumatizing our communities.”