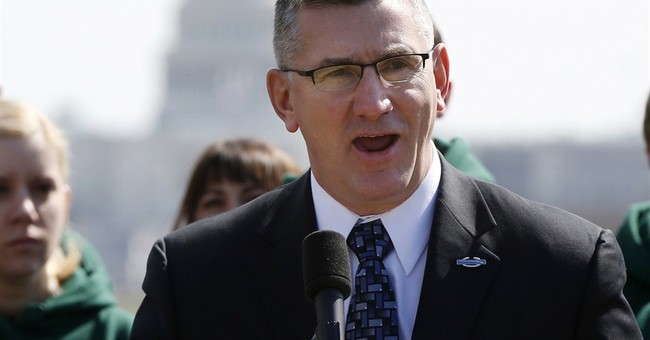 Weeks after dropping out of the Montana Senate race over allegations of plagiarism, the U.S. Army War College revoked the master’s degree held former Sen. John Walsh; the paper was part of earning that degree. Walsh was accused of not properly cited sources in the term paper, which led to him dropping out the race (via AP):

The college assigned an academic review board to the probe in August after The New York Times published a story showing Walsh borrowed heavily from other sources for the paper he wrote in 2007.

Walsh was pursuing a master of strategic studies degree at age 47, a year before he became Montana's adjutant general overseeing the state National Guard.

The board of the Carlisle, Pennsylvania-based college took less than a day to hear the case and make its findings Aug. 22. But the process of appeal and review wasn't completed until Friday.

"The board found that then Colonel John Walsh did commit the offense of plagiarism and thus his Master's Degree and status as graduate of the U.S. Army War College should be revoked," War College spokeswoman Carol Kerr said in a statement.

The review board's report found the plagiarism "egregious." A review of Walsh's paper by the school's director of communicative arts found little, if any, original language or research and that it was "primarily composed of verbatim liftings from other sources" presented as if they were Walsh's own work.

"In short, the paper was plagiarized and ... the plagiarism was intentional," the review board said in its report.