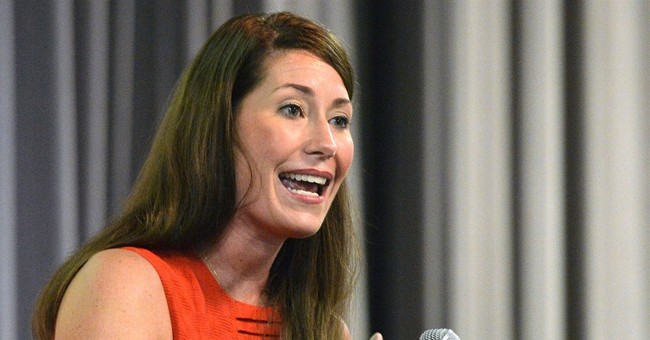 The Kentucky Senate race is going to be close, but Democrat Alison Lundergan Grimes might have to explain an in-kind campaign contribution that could be illegal. Ms. Grimes has been traveling across the state in a 45-foot long bus, which was acquired by her father's company. She's renting it for a fraction of the market price, which violates campaign finance laws (via  Politico):

Federal campaign finance law bars a campaign from receiving goods and services below the fair market value from a corporation, regardless of whether it is owned by a family member.

A review of Federal Election Commission records shows Grimes paid less than $11,000 through June to rent the bus for at least 24 days, amounting to about $456 per day. Officials at four bus companies said they typically charge $1,500 to $2,000 a day to rent a similarly sized bus, and Senate Minority Leader Mitch McConnell’s campaign said it spent at least $2,200 per day to rent essentially the same bus during a swing earlier this month. That would amount to a savings of tens of thousands of dollars for the Democrat’s campaign.

The spending highlights the central role that Jerry Lundergan, a gregarious former Kentucky Democratic Party chairman and state lawmaker, is playing in his daughter’s bid to unseat McConnell. Polls show the GOP leader maintaining a very small lead in the race, one of the most closely watched in the country this year.

The difference between what the company is charging her campaign and the fair market value of the bus rental could be considered an illegal in-kind contribution, according to legal experts.

“If it’s coming from a corporation, it’s illegal,” said Larry Noble, who served as general counsel of the FEC for 13 years and now works at the Campaign Legal Center, a watchdog group. Corporations are prohibited from donating cash or gifts to a campaign, while individual donors’ limits cannot exceed $5,200 per election cycle.

Lundergan, Noble added, “can volunteer himself to the campaign, but what he can’t do is volunteer his company.”

Ms. Grimes isn’t the only person facing scrutiny for possible campaign finance violations. Incumbent Democratic Senator from Louisiana, Mary Landrieu, billed a charter flight to taxpayers, but it seems this wasn't the first time. Politico also reported that Sen. Landrieu has ordered her staff to review all travel records during her three terms as senator:

A review of Landrieu’s office expenditures and campaign records reveals two trips from 2012 that may have been improperly billed to her Senate office rather than her reelection campaign.

On Aug. 23, 2012, Butler Aviation charged $6,787 for an in-state flight for Landrieu that included multiple stops. The flight was from New Orleans to Vidalia to Shreveport to Alexandria and back to New Orleans, according to official disbursement records Landrieu filed with the secretary of the Senate.

On Oct. 18, 2012, Butler Aviation charged $3,437 for a Landrieu flight from New Orleans to Opelousas to Patterson and back to New Orleans.

Both trips included campaign-related events that raise questions about whether some or all of the costs of the charter flights should have been covered by Landrieu’s reelection campaign, rather than her official office.

Landrieu is facing a barrage of bad press over this issue. USA Today reported in July that she spent $47,000 last year on in-state flights using her official Senate office to cover the cost.

Landrieu has now ordered her staff to complete a review of all official travel she has taken during her three terms as a senator in an effort to limit the political damage by disclosing any improperly billed trips all at once.

Hence, why Republicans are calling her “Air Mary." Additionally, Mitch McConnell said Grimes  "cannot be trusted," citing the discount she received over her campaign bus.  Grimes has insisted she's paying rent for her transportation at market rates.