Guess What? I'm Having An Abortion Today 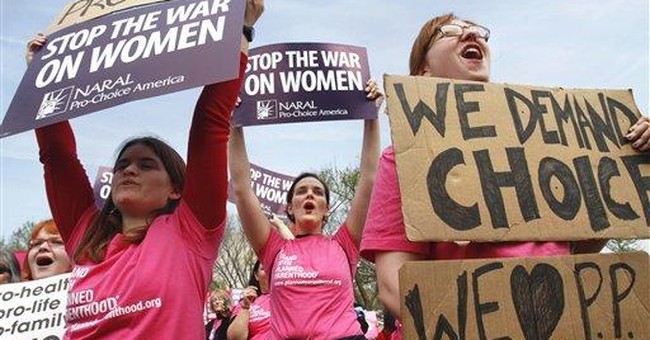 We all know Salon is a joke; a site dedicated to satisfying the liberal base with stories about racism, the Tea Party, and how to use male sex toys. But their assistant Jenny Kutner had a very special announcement: she’s having an abortion today at 10am EST (emphasis mine):

I’m pregnant. I just found out. I’m having an abortion on Saturday at 10 a.m.

And, it seems, no amount of background information — no critical mass of other women’s stories or screenings of “Obvious Child” — will give me much insight into how I, Jenny Kutner, will feel about my abortion when it happens. Still, I have been looking for background information, and I briefly tried to defy my stubbornly non-psychic brain by reading what other women have written about their abortion experiences.

There is, of course, a sort of collective narrative that has formed, especially amongst pro-choice women like myself. Here’s what I noticed about that larger collective narrative: It contains very few stories about what women experience just before their abortions. Mostly we only hear about a procedure in its aftermath. Right now, I do need to hear about the aftermath. I need to be reminded that on Saturday I will wake up pregnant and on Sunday I will not; I need to be reminded that my life will go on once I carry out this decision that is totally and completely right for me, not everyone, and that is totally and completely right for so many other women who have made or will make the same choice. But right now I’m not in the aftermath. I’m in a part of the abortion experience that feels just as crucial as the abortion itself.

The piece is nauseating. It is another half-baked essay trying to rationalize abortion. Then, Kutner talked about Texas, where she used to live, and how she was proud to stand with other pro-aborts when then-State Senator Wendy Davis filibustered a bill that would’ve banned abortions 20 weeks into a pregnancy, despite the fact that pretty much everyone, including 60% of American women, support the ban.

Regardless, she talked about the restrictions in Texas that were eventually passed under Governor Rick Perry and how she would’ve been subjected to them, like having a sonogram and hearing “about the development of the zygote inside me” if she still lived there.

Yep, it’s not a child, a baby, or a life; it’s a zygote. At least she didn’t say clump of cells. But, she moved to New York, the abortion capital of the country, so there’s no problem.

As I waited to speak with a counselor at a New York Planned Parenthood last weekend, I felt a wave of relief at the thought of being so far from home. Really, it was relief at the thought of being trusted to make my own decision, at being able to avoid having a probe shoved inside me in an effort to make me question, regret or alter that choice. There are no mandated ultrasounds in New York; no condescending scripts for the doctors to read; no increasing shortage of clinics because of legal entrapments that endanger women’s health. I thanked my lucky stars, for maybe the first time in my life, that I was not in Texas.

Just as I did, a counselor called my name and asked me to follow her down a hall to a small, carpeted room with a desk and no windows. On the desk sat a plastic-encased model of a ParaGard IUD, the little copper “T” with which I had entrusted my reproductive health for exactly a year. I stared at it while the counselor confirmed that I was, indeed, pregnant — about five weeks, judging by the start of my last period.

She then presented me with several options. I told her I wanted to have an abortion. She did not tell me that I would have to come back for another appointment before the abortion and she did not try to talk me into another course of action. Instead, she asked when I could come in for the procedure and put it on the calendar. Then she sent me on my way.

I wasn’t sure what to feel after I made the appointment, so I just stood still on the sidewalk for a few minutes and cried. I cried because I was overwhelmed and confused, although I wasn’t at all confused about my decision.

The end of her article is almost prophetic where she says, “despite all the support I’ve received, I have walked around furious for the past week at the thought of those anonymous people who would tell me I’m wrong not to stay pregnant.” Yep. As a pro-life American, I’m duty-bound to tell you that what you’re doing is abjectly barbaric, but that’s for a later discussion.

Kutner is having her abortion in one hour.