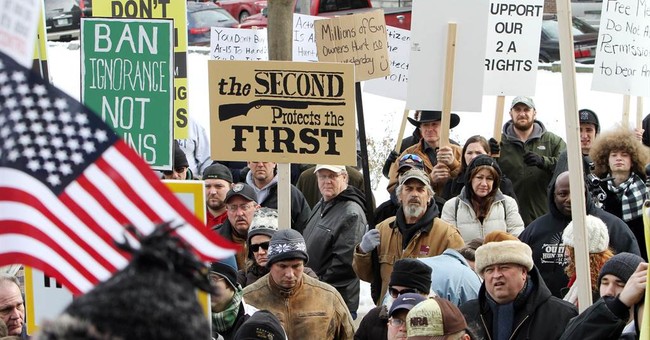 It was a decision celebrated by gun rights activists everywhere, and one the Second Amendment Foundation had been waiting for since 2009, when the nonprofit group first filed the lawsuit on behalf of three D.C. residents and a New Hampshire resident.

But the battle to uphold the right to keep and bear arms in our nation’s capital would continue even after the victory in the Palmer case, as the District council soon thereafter voted to implement a highly restrictive and controversial may-issue carry law, which forces law abiding citizens to show “good reason” for wanting to carry a weapon.

Alan Gura, SAF’s attorney who challenged the ban, isn’t giving up on the fight, however, which is continuing to play out in court this fall.

“At the end of the road, wherever, whenever that is, is tough to say,” Phil Watson, SAF’s director of special projects, said of the future of Palmer. “But I think we’re gonna be winning because no matter if you think we’ve been advancing slowly or quickly, we’re advancing.”

Indeed, the Bellevue, Washington-based group has made considerable strides in advancing citizens’ Second Amendment rights across America since the organization’s founding in 1974.

“Back then, in the 1970s, there really was no real case law or … anything scholarly on the legal side to hold the Second Amendment debate,” Alan Gottlieb, SAF founder and executive vice president, tells Townhall. “And we felt we needed it for the future because our goal when we founded it was to get a case before the United States Supreme Court and have the Court affirm an individual’s right to keep and bear arms.”

And that’s exactly what SAF did.

Though it took more than 30 years since the group’s inception, Watson says the landmark cases of District of Columbia v. Heller in 2008 and McDonald v. Chicago in 2010 were game changers for the expansion of gun rights.

“It wasn’t our case directly, but we were involved in the Heller case with a very important amicus brief that I think may have gotten us the fifth vote on the Supreme Court, and so obviously the Heller case started it all. Our attorney Alan Gura is who filed that case, so while it wasn’t our case it was our attorney, and yeah, I look at that as being important no matter what,” says Gottlieb, who’s also the chairman of the Citizens Committee for the Right to Keep and Bear Arms.

After the Heller ruling, SAF and the Illinois State Rifle Association moved forward with filing a federal lawsuit against Chicago’s handgun ban.

It was this Supreme Court case, Gottlieb says, that really spurred all other Second Amendment litigation against various state and city laws.

At any given time, SAF has as many as 24 active court cases going on, according to its website. And despite the “lean” but “mean” size of its operations, Watson says they’re able to be as involved and successful as they are by cooperating with grassroots groups all over the nation.

From challenging the carry ban in Illinois (Moore v. Madigan) to North Carolina’s emergency powers act (Bateman v. Purdue), and so many others, SAF has had an impressive track record of success over the years.

One project the group is currently undertaking that tends to fly under the radar is its Legal Preemption Project.

“We’ve now done 11 states where we go through every single law that’s on the books in every locality, every city, every county in the state that are in conflict with the state preemption laws,” Gottlieb explains. “We’ve now gotten several hundred laws off the books just by threatening to go to court … these are really big victories for gun owners that don’t make a whole lot of headlines.”

Aside from its legal action in defense of the Second Amendment, SAF is also involved in public education programs and has multiple publications, including TheGunMag, Women & Guns, and The Gottlieb-Tartaro Report, among others.

Additionally, SAF staff frequently make radio and television appearances to make the case for the Second Amendment. And on more than one occasion, Gottlieb has had the special privilege of taking on noted gun control advocate Piers Morgan.

“A lot of people in the gun rights movements don’t like to go up against the opponents like Piers Morgan, who obviously is obnoxious and in your face and tries not to let you get your views out,” he says, “but I enjoy doing that because quite frankly, we have the truth on our side and I don’t mind debating the other side at all.”

While there are still many battles to be fought on behalf of the Second Amendment, there’s no doubt citizens’ rights have expanded greatly because of SAF’s work throughout the years, thanks in large part to support from its more than 650,000 members and contributors.

“I think if guys like Alan Gottlieb, and a couple others that are really the key players in the pro-Second Amendment community in the past few decades, if there weren’t those guys out there, there’s a likelihood that we wouldn’t be where we are with the rights we have right now,” Watson says—a point even progressive groups acknowledge.

“Though few Americans have ever heard of Alan Gottlieb,” Media Matters’ Alexander Zaitchik wrote in an article on the 2013 Gun Rights Policy Conference, “we live in a country he helped create.”

And for that, Second Amendment advocates everywhere are grateful.