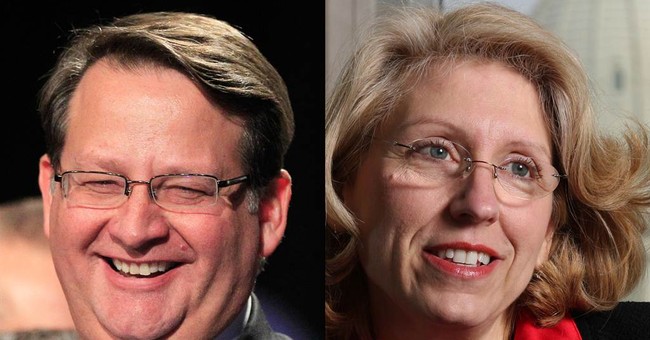 Things are looking up for Republican Senate hopeful Terri Lynn Land in Michigan. A Rasmussen poll released on Tuesday shows Democratic Congressman Gary Peters picking up 41 percent of the vote, with Land at 39 percent. The statewide poll of 750 likely voters for retiring Democratic Sen. Carl Levin's seat was conducted on September 17-18.

With only 40 days until the election, this poll shows Land is gaining momentum, as she was previously down by six to nine points earlier this summer.

Rasmussen has now shifted its rating of the Michigan race from Leans Democratic to Toss-Up.

“Michigan’s U.S. Senate race is a dead heat and Terri Lynn Land has the momentum,” Land campaign spokeswoman Heather Swift said in a statement. “Michigan voters recognize that Terri has a plan to put Michigan First by fixing our roads, securing our borders, and creating jobs. Meanwhile, all Gary Peters has to offer is more typical Washington hypocrisy. From outsourcing a Michigan contract to China to profiting off petcoke to paying his female staffers 67 cents on the dollar by his own math, Michigan voters are learning that Gary Peters is most hypocritical on the issues he’s most outspoken on.”