D.C.'s Most Popular Bar Says No To Wage Hike 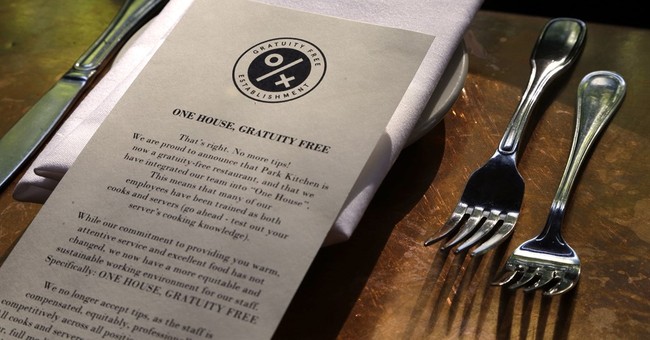 Tuesday is Election Day in Washington D.C. and among many of the hotly contested items on the ballot, is Proposition 77. This would eliminate tips for bartenders and wait staff and raise the wage to $15 an hour by 2020.

Proposition 77 is a union-backed proposal which has won “plaudits from big labor allies and academics” reports the Washington Free Beacon. A “Vote No” sign has been posted on every light pole between 18th and K streets northwest.

A block from northwest K Street is Bottom Line Bar, which has been a prominent bar in D.C. for 40 years, according to its menu. While the ownership of Bottom Line Bar has evolved over the years, the clientele has not changed, “…underpaid online reporters, interns, and lunch drunks—the type of people not known for being good tippers,” reports the Free Beacon.

“Of course, high-end waiters with $6 beers and $70 entrees like tipping, but they are the exception, according to labor advocates. Big Al, Bottom Line's best waiter, says this is not the case,” Big Al told WFB.

Bottom Line began introducing a pamphlet in with checks to “Save our Tips” and vote “No on 77.”

“The pamphlet says restaurants and bars will be forced to reduce staff and shifts, eliminate overtime, and close restaurants if Initiative 77 passes,” reports WFB.

According to a 2017 study, Washington D.C. is only second to Hawaii in the race for "stingiest tippers in the nation."