Obama: Yeah, This Iran Deal Doesn't Actually Stop The Regime From Getting a Bomb 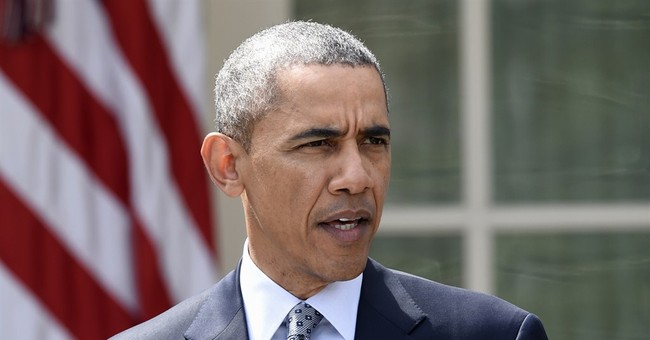 Think the latest deal with Iran will keep the regime from getting a nuclear bomb? Think again. As expected, the deal on the table (you can find details here) only slows the process.

The president was attempting to answer the charge that the deal framework agreed upon by the U.S., Iran, and five other nations last week fails to eliminate the risk of Iran getting a nuclear weapon because it allows Tehran to keep enriching uranium.

Obama said that Iran would be capped for a decade at 300 kilograms of uranium -- not enough to convert to a stockpile of weapons-grade material.

"What is a more relevant fear would be that in Year 13, 14, 15, they have advanced centrifuges that enrich uranium fairly rapidly, and at that point, the breakout times would have shrunk almost down to zero," Obama said.

The stark admission -- after his energy secretary even claimed the deal was a "forever agreement" -- came as the president seeks to quiet a growing chorus questioning whether the deal he and world leaders have negotiated merely delays the certainty of a nuclear-armed Iran. Obama has insisted confidently that Iran will not get a nuclear weapon on his watch, which ends in roughly 20 months, but has made no similar assurances about his successors.


President Obama is also continuing the argument that anti-Israel, anti-Semitic and anti-American statements made by Iranian officials will not be considered in the latest nuclear deal. It was just two weeks ago, in the middle of negotiations, that trusted Iranian Supreme Leader Ali Khamenei chanted "Death to America" with a large crowd gathered in Tehran.

Khamenei told a crowd in Tehran that Iran would not capitulate to Western demands. When the crowd started shouting, “Death to America,” the ayatollah responded: “Of course yes, death to America, because America is the original source of this pressure.

The administration is also attempting to dismiss the fact that the Iranians refusal to acknowledge Israel's right to exist has everything to do with their desire to obtain and use a nuclear weapon against the Jewish State.

"Even if we were to reach a good agreement....we're still going to have a long list of concerns about Iran's behavior. I don't want to leave anybody with the impression we're going to solve all of those concerns through nuclear talks," White House Press Secretary Josh Earnest said last week. "The international community is united no this. What's holding up the talks is the specific commitment that we need to see."

A bipartisan coalition of Senators is growing in opposition to the Obama administration's deal with the regime. President Obama has said he will involve Congress in the negotiation process, so long as they agree to his terms and approve the deal.