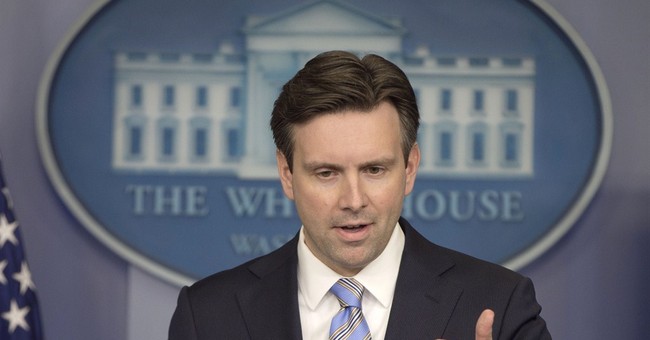 Speaking from the White House Tuesday afternoon, Press Secretary Josh Earnest said he wasn't going to "unpack" the decision process leading up to President Obama's absence from the world stage in Paris over the weekend. On Sunday, 40 top-world leaders, including British Prime Minister David Cameron and Israeli Prime Minister Benjamin Netanyahu, gathered at the front of a crowd of 1.5 million people and marched in unity after the Islamic terror attacks on Charlie Hebdo last week.

"One of the distinguishing features of this particular incident that I think we would all acknowledge is that it's not routine," Earnest said when pressed by  NBC White House correspondent Chris Jansing. "This is a march that was planned in 36 hours notice. It took place in a foreign country. It's not common that the president would attend an event with 1.5 million other people, again let alone in another country...this is not just a routine matter."

"I'm not going to unpack the decision so I don't have a lot more to say on this," Earnest said. "When the President does receive invitations to attend an event we do of course have a formal process for evaluating those invitations and getting back in a timely fashion to those who have extended the invitation, but obviously this situation was a little bit different than that."

Earnest also said there would not be a review about how the decision not send President Obama or another high-ranking government official to France was made.

Yesterday Earnest admitted that the White House made a mistake and should have sent a high-profile U.S. government official to participate in the march. He also admitted that he didn't know what President Obama was doing during the time of the march.