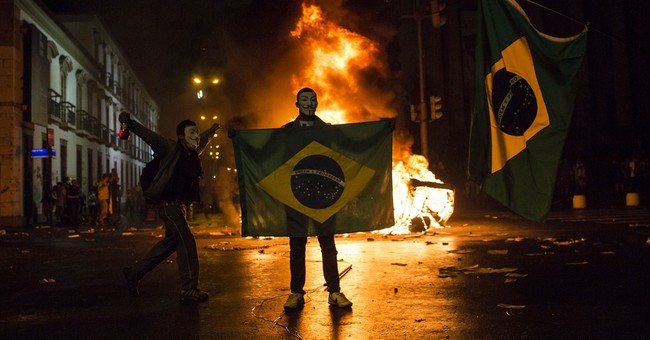 As the 2014 World Cup kicks off at 4 p.m. (ET) today in Brazil, the country will take extensive precautions to ensure the safety of all in attendance.

Brazil has spent nearly $2 billion on security, guarding the games with over 100,000 law enforcement officers and 57,000 armed forces from the army, navy, and air force. To thwart both foreign and domestic violence, the country has also invested in German anti-aircraft tanks, American bomb-detecting robots, and Israeli surveillance drones.

While there are no known terrorist threats, the Brazilian government is carefully safeguarding the event in case any disturbance may occur:

While any large sporting event is a tempting target for terrorists –- as attacks on the 1972 Munich Olympics by Palestinian terrorists and on the 1996 Atlanta Olympics by a domestic terrorist demonstrated -- the World Cup is especially hard to police. Sixty-four matches will be played at a dozen stadiums around the sprawling South American nation over the next 31 days, and will attract approximately 3.7 million tourists – including wealthy politicians and influential business leaders from around the world.

The greatest risk for terrorist activity will in fact be overseas. Analysts predict that World Cup screenings in Iraq and parts of Africa could potentially be in danger. During the 2010 South Africa World Cup final, 70 people were killed as the result of two suicide attacks in Kampala, Uganda.

Boko Haram, the Islamist terrorist group who recently kidnapped 200 school girls, poses a great threat in Nigeria. On June 1, militants set off a car bomb, killing 18 people who were watching a soccer game in the Adamawa settlement of Gavan. Nigerian sports bars have been temporarily closed in an effort to prevent attacks on those gathered to watch the World Cup.

In Brazil, concerns include theft crimes, drug gangs, sex trafficking, and more street riots. Last June during the Confederations Cup, a warm-up event to the World Cup, one million protestors stormed the streets. Since then, there have been ongoing disturbances and revolts as citizens protest government corruption, cost overruns, and excess spending to host the World Cup.

According to a Pew Research Center study, 75 percent of Brazilians said that the national government was an overall force for good in 2010. Now, just four years later, only 47 percent say the same. In another poll, 61 percent believe that Brazil hosting the World Cup is detrimental to the country since so much money is taken from public service funds to support the event.

Even though Brazil remains the seventh largest economy in the world, economic growth under President Dilma Rousseff has slowed. With the government spending a whopping $11.5 billion in preparation for the 2014 World Cup, the return on investment unfortunately looks doubtful. The whole world will be watching to see if riots, crime, and terrorism will tarnish the greatest global sports event of the year.