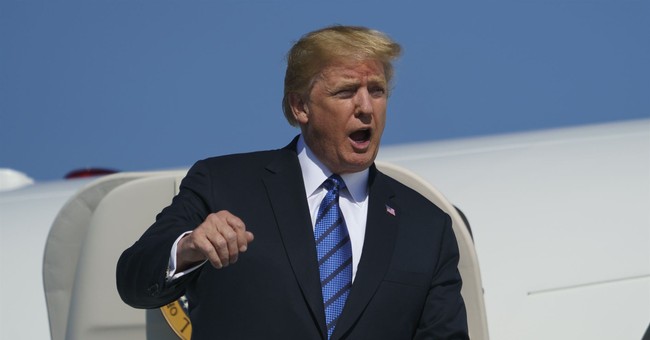 When I wrote last week that President Trump's capitulatory press conference with Vladimir Putin was a low moment in his tenure thus far, I wasn't out on a limb.  Trump's equivocations prompted rebukes from scores of Congressional Republicans, as well as critiques from a number of national figures who are typically supporters and allies.  Trump's secret sauce, however, is that the more he's attacked, the more Republican voters feel compelled to circle the wagons and rally to his defense -- hence the polling released last week in which super-majorities of GOP-leaning voters said they approved of his performance with Putin, and share his views on trade wars and tariffs.  If it had been Obama at the center of either controversy, Republicans would undoubtedly have been nearly unified in intense opposition, but tribal loyalty is paramount these days.  Indeed, for a great many partisan voters, Trump himself is the top "issue" ahead of the midterms, according to a new Politico/Morning Consult poll:

If the election turns into a referendum on the president, that could be a boon to Democrats...if Trump's job approval rating is in ugly shape, and if undecided voters break substantially against him.  A new NBC/WSJ poll contains hopeful signs for both parties.  Let's start with the good news for Republicans: The president's approval numbers have surged in the series, placing him back in the mid-40's:

President Donald Trump’s approval rating edged higher during a week in which he faced withering criticism following a summit with Russian President Vladimir Putin, signaling that he is positioned to weather the latest controversy sparked by his unusual brand of politics. Mr. Trump’s job approval rating rose to 45% in a new Wall Street Journal/NBC News poll, the highest mark of his presidency and up 1 percentage point from June. The survey was taken over a four-day period that started July 15, a day before Mr. Trump’s news conference with Mr. Putin in which he questioned the conclusion of U.S. intelligence agencies that Russia meddled in the 2016 election...Mr. Trump’s overall approval rating continued to rank among the lowest of any modern president at this point his first term, and the poll turned up warning signals for him.

For what it's worth, Rasmussen's new data is almost identical.  As the Journal's write-up notes, (45/52) is historically pretty weak for this juncture of a presidency, but it's still competitive -- and significantly stronger than Trump's image among actual voters on election day 2016.  What explains that uptick, especially in light of the Russia debacle (of which a heavy majority of voters disapproves in the survey)?  Two factors: First, a nearly unprecedented 'rally around the flag' effect among GOP-leaners, fully 88 percent of whom approve of Trump. “The more Trump gets criticized by the media, the more his base seems to rally behind him,” one of the pollsters is quoted as saying. Second, strong marks on the economy:

Trump's at +16 on the economy, per NBC/WSJ: pic.twitter.com/Mkyhu4ZIEA

It also appears as though voters are giving Trump the benefit of the doubt and some time on his North Korea gambit (the status of which is murky, with the president downplaying the need for a timetable on benchmarks), with trade policy currently looking like roughly a public opinion wash (though it's harming the American economy).  The administration's quickly-scuttled family separation policy remains deeply unpopular, and by a two-to-one margin, voters give a thumbs-down to Trump's handling of US relations with Russia.  In other words, the big flashpoints of negativity are known to the public; they're just offset by other considerations.  The Republican Party has rebounded a bit on the generic Congressional ballot, meanwhile, pulling to within six points of the Democrats -- down from a ten-point deficit last month.  But here are the big warning flares:

Despite the GOP gaining four points on the generic ballot in the NBC/WSJ survey (now down 49/43), these two internals are the worrisome parts for the party: Enthusiasm + indies are on the Democrats' side, which mirrors Republicans' 2010 dynamic... pic.twitter.com/vKm8Ktcdkj

Among independents, Trump's overall approval is at a dangerous (36/58), and a large plurality (46 percent) of independent voters "strongly disapprove" of his presidency.  As for Russia's 2016 interference and the Mueller probe (neither of which are crucial top-of-mind priorities for many voters at all, according to Gallup), views seem to have calcified.  By an eight-point margin, the public supports the special counsel investigation continuing, with responses breaking along party lines.  About two-thirds of voters agree with the US intelligence community-confirmed fact that Moscow meddled in the last national election, but less than one third believe that "Democrat Hillary Clinton would have won without the interference."  Speaking of Hillary, I'll leave you with this puzzling data point from another recent survey.  Third time's a charm, liberal ladies?

Despite failing to beat Donald Trump in the 2016 presidential election, a plurality of female Democratic voters want Hillary Clinton to take another crack at it in 2020 for some reason.https://t.co/SUbBJVMWzF

UPDATE - One more note. If there's going to be a sizable blue wave, Democrats should be able to win this seat. Granted, this is a GOP internal poll, but worth taking a peek at, as other polling also shows a very tight race: