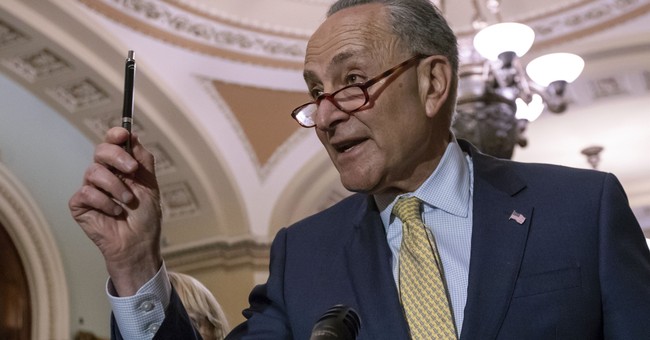 For weeks, Left-wing groups have been preparing for war against the president's forthcoming Supreme Court nominee, signaling furious opposition to any of the names on Trump's widely-reported short list.  Activists are insisting that all 49 senate Democrats stick together to vote 'no,' a wall of solidarity that could help sway just two wavering Republicans to derail the selection.  It's an uphill battle, even if Chuck Schumer manages to keep his whole team on the same side.  Both Susan Collins and Lisa Murkowski, the GOP moderates who'd most plausibly break ranks, joined Mitch McConnell and all of their partisan colleagues to detonate the Reid Rule in order to confirm conservative Neil Gorsuch to the High Court last year.  Each has a long history of voting to confirm judicial picks -- and not just from Republican presidents, in Collins' case.  Unless Trump shocks everyone and picks somebody out of deep right field, or his nominee self-destructs, it's highly likely that all GOP members of the upper chamber will be on board.   If that's the case, it'd be all over but the shouting -- and it may be a lot of shouting:

Under particular pressure to side with the president are the three red-state Democrats who voted for Justice Neil Gorsuch last year and face difficult reelection campaigns: Sens. Joe Manchin, Heidi Heitkamp, and Joe Donnelly. Keeping them in the Democratic fold — in the face of withering pressure from a liberal base that expects nothing less — amounts to the biggest challenge of Schumer’s 18-month tenure as Democratic leader. The New Yorker has preferred to take a hands-off approach to his moderate members, rather than twisting arms on big votes. Yet it’s far from clear that will work this time. “The message from grassroots groups is pretty clear: that if Democratic leadership can keep their caucus unified in doing no harm, we can aim our firepower on Republicans like Susan Collins and Lisa Murkowski and bring full pressure to bear in their states,” Adam Green, co-founder of the activist Progressive Change Campaign Committee, said in an interview.

The Left plans to harp on Roe v. Wade (this is a good piece partially examining the disparity between Roe polling and abortion polling more broadly) and Obamacare -- and they're counting on Democrats to adopt a more aggressive posture of resistance: "Local members of the anti-Trump group Indivisible have been particularly vocal in [Schumer's] home state, prodding him to actively “whip the vote” in his caucus...'People remember the Gorsuch fight. My sense is that this will be different,' Ben Wikler, Washington director of MoveOn.org, said in an interview."  The final mantra mentioned in the Politico story: "Keep Democrats together."  But how realistic is that?  Three Democrats who represent red states carried overwhelmingly by Trump have already voted to confirm Justice Gorsuch; why would they be inclined to oppose Trump on such a massive stage, right in the thick of their respective, challenging re-election bids?  Confirmation votes could come in October, weeks before the election.

And what about Democrats like Jon Tester and Claire McCaskill?  They're each far more liberal than their constituents, but if they're feeling heat back home, or nervously eyeing internal polling, they might be swayed to back a qualified SCOTUS pick.  Claiming to be a moderate occasionally requires moderation.  I wouldn't hold my breath, but there's a non-zero chance that some non-Manchin/Donnelley/Heitkamp Democratic votes are in play.  Regarding Tester, on Special Report last night, I said that Republicans need to hold his feet to the fire on the issue of judicial confirmations.  Tester was a reliable rubber stamp for Obama judges -- including two liberal SCOTUS picks, one of whom sided against the Second Amendment in a major case (the other wasn't on the Court yet, but would probably have done the same) -- yet voted against Neil Gorsuch.  Tester positions himself as a gun rights supporter, yet his track record on the federal judiciary is antithetical to that stance.  If a liberal Supreme Court were to jettison Heller and McDonald one day, Tester would likely object -- but his votes would have made that outcome possible.  Shortly after offering that analysis on television, President Trump hammered Tester on precisely that point at his raucous Montana rally:

"Jon Tester voted against Neil Gorsuch, the incredible justice who supports fully our Constitution...I see him say all these nice things about me, but he never votes with me...Jon Tester voted for liberal Obama judges who tried to take away your Second Amendment because [he] doesn't share your values."

Trump’s strongest line of attack against Tester is noting how the “pro-second amendment” & “moderate” Democrat voted against Gorsuch, but was a rubber stamp for a slew of 2A-hostile Obama judges. Big vulnerability for Tester. #MTSen

If Republicans peel off a few Democratic votes for Trump's nominee, it's game over.  That's a reality because of the choices Democrats have made, from nuking the judicial filibuster in 2013, to stupidly wasting their unprecedented SCOTUS filibuster on Neil Gorsuch.  Even in this era of acute partisanship, fueled by endless Democratic escalations against which the GOP has finally retaliated, Trump should be able to get a qualified nominee through.  I'll leave you with Chuck Schumer's latest piece of ludicrous advice on this subject, which -- much like the rest of his counsel -- deserves to be mocked and ignored.