Implosion: How Steve Bannon Mortally Wounded Himself, in Three Steps 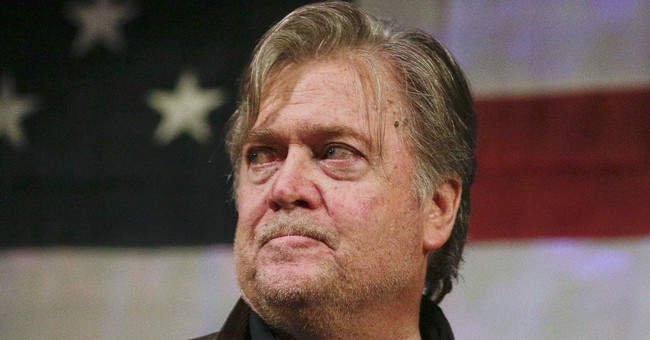 Steve Bannon is now at war with the entire Republican Party, with President Trump and his family leading the charge.  After the White House released a volcanic statement from Trump yesterday afternoon -- which very much sounded like it was personally dictated by Trump, probably because it was -- both the Republican National Committee and the Senate Leadership Fund (Mitch McConnell's group) highlighted it as "in case you missed it" emails blasts.  It was practically impossible for anyone in this town to have possibly have missed this story, but the purpose of the amplification was clear: To go nuclear on a figure who is now seen as toxic and deranged by virtually the whole party.  How did Bannon manage to go from a trusted Trump adviser to the target of blistering Trump attacks in such short order?  Three major contributing factors:

(1) Alabama and other embarrassing flops.  Bannon famously backed Roy Moore over the president's preferred candidate in the Alabama Senate race, picking the man whose extreme views and sordid history of dating (and allegedly molesting) high schoolers as a grown adult combined to achieve the impossible: Losing a Senate seat Jeff Sessions had most recently won with 97 percent of the vote.  Bannon has also been forced to sever ties with other 'talent' he's spotted and cultivated -- Paul Ryan's failed primary opponent and an infamous media gadfly -- due to their unhinged behavior and unsubtle flirtations with white nationalists.  This self-stylized Kingmaker keeps trying to crown duds who end up reflecting terribly on him and the cause he's ostensibly trying to promote.  And now Bannon's top financial benefactor appears to be backing away from him, too:

Bannon has alienated megadonor Rebekah Mercer among others, who has told others she will no longer support his efforts financially. W/@AshleyRParker and @PostRoz: https://t.co/O2mZBmB6L4

(2) Granting the Fire and Fury author White House access.  The salacious new book was written by a reporter for the left-wing Guardian, whom Bannon saw fit to entrust with extraordinary access to the Trump White House.  The result of that decision is an exceedingly unflattering and humiliating portrait, perhaps accented with made-up  or misattributed quotes and anecdotes, painted by a man with a reputation for fabulism and embellishment.  Another brilliant stroke.  Tellingly, however, someone who isn't denying his own quotes is none other than Steve Bannon.  Why not?  This seems right to me:

Either he knows that Wolff has him on tape or it’s the case that Bannon was simply too crucial to Wolff’s own reporting in the book for him to plausibly deny saying what he said. Michael Brendan Dougherty notes that the excerpt from the book that blew up online today is conspicuously flattering to Bannon, which wouldn’t be the first time Wolff has been complimentary of him in print. It may be that not only has Bannon been leaking to Wolff for months/years but that he’s a prime source for all sorts of details in the book. If he turns around now and calls Wolff a liar, Wolff might burn him by revealing all the anonymously sourced material that came from him or his allies.

And -- ta da! -- it looks like there are tapes, after all.  This mess reminds me of another time Trump got burned by an underling's decision to allow access to a reporter who ended up writing a stinging account. That flunky was unceremoniously fired for embarrassing his boss. Well, Bannon's already gone, of course, but Team Trump keeps dropping bomb after bomb on him, including a 'cease and desist' letter, citing a non-disclosure agreement. Even if you remove all of Bannon's juicy quotes, Trump would see this episode as a catastrophic error in judgment and a betrayal -- and confirmation that Bannon was a serial leaker, a grave offense in a White House paralyzed by leaks.

(3) The Trifecta: Insulting Ivanka, calling Don Jr. "treasonous," and implicating the president in Russiagate.  If you wanted to concoct a recipe to utterly infuriate Donald Trump, this would be it.  Ridicule his favorite child as "dumb as a brick," toss around Maxine Waters-style characterizations of the Trump Tower meeting as "treasonous" and "unpatriotic," and fuel the Left's Russia-collusion narrative by asserting that candidate Trump himself was involved in the sketchiest meeting of that whole saga:

Former White House chief strategist Steve Bannon said he's certain that Donald Trump Jr. brought attendees of the June 2016 Trump Tower meeting to meet his father. "The chance that Don Jr. did not walk these Jumos up to his father's office of the 26th floor is zero," Bannon told author Michael Wolff. Bannon's comments appear in Wolff's "Fire and Fury: Inside the Trump White House," which is based on more than 200 interviews with the president and members of his staff...Bannon is also quoted in the book saying the meeting was "treasonous" and "unpatriotic." Attendees of the meeting included Russian lawyer Natalia Veselnitskaya and other Russians. Trump was reportedly in Trump Tower on June 9, the day of the meeting. Bannon joined the Trump campaign team two months after the meeting.

So here we have this supposed Kingmaker shivving the King, wounding and inflaming Trump and leaving himself with a drastically reduced constituency in the process.  Quite a move by a one-time "chief strategist."  At the very least, Democrats on the Hill, and probably a number of Republicans, are going to be curious about why Bannon (who'd totally dismissed the Russia story on 60 Minutes a few months ago) would use a word like "treasonous" in this context.  They'll also be curious to see if he has information to back up his comment that Don Jr. and company really did escort that Russian cutout peddling anti-Hillary dirt over to see his father.  What does Steve know, and how does he know it?  The calls for Bannon's testimony have already begun. It is simply astounding that the person who has breathed the most oxygen into the "collusion" storyline in recent memory -- possibly through nothing more than arrogant, baseless speculation whispered to a lefty journalist -- is Steve Bannon.  If the put-downs of Trump's kids weren't enough, that's an inexpiable sin.  And thus the scathing presidential statement and the string of bruising Twitter salvos from the president's eldest son:

Steve had the honor of working in the White House & serving the country. Unfortunately, he squandered that privilege & turned that opportunity into a nightmare of backstabbing, harassing, leaking, lying & undermining the President. Steve is not a strategist, he is an opportunist

What does Mr. Bannon have to say about all of this?  Not much, aside from muttering about Trump being, er, "a great man."  Perhaps he finally realizes he's already said enough.  I'll leave you with this reaction to the White House reportedly cracking down on leaking by limiting personal devices:

I'm not sure how much a West Wing cell phone ban is supposed to help comms discipline when the recent, problematic "leaks" came in over 200 interviews with an author the president encouraged staff to cooperate with.

Oh, and is Steve Bannon plotting to...run for president?