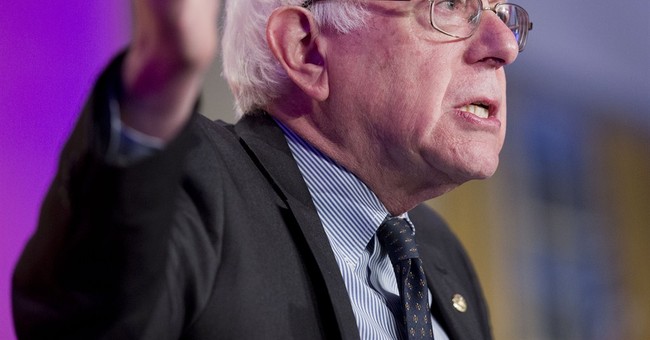 And I'm not even talking about Hillary's big re-launch.  Those millionaires are crunchy ice cream magnates Ben and Jerry, who hail from Sanders' home state of Vermont, so I'm trolling a bit. But this is all technically accurate:


I used "re-announces" in the headline, by the way, because, uh, didn't we just do this a few weeks ago?  In any case, he's fully in now, running a hard-left campaign.  How hard-left, you ask?  Try this on for size:

SANDERS: … If my memory is correct, when radical socialist Dwight D. Eisenhower was president, the highest marginal tax rate was something like 90 percent.

HARWOOD: When you think about 90 percent, you don’t think that’s obviously too high?

SANDERS: No. That’s not 90 percent of your income, you know? That’s the marginal. I’m sure you have some really right-wing nut types, but I’m not sure that every very wealthy person feels that it’s the worst thing in the world for them to pay more in taxes, to be honest with you. I think you’ve got a lot of millionaires saying, “You know what? I’ve made a whole lot of money. I don’t want to see kids go hungry in America. Yeah, I’ll pay my fair share.”


Perhaps some "right-wing nut" types might object to the federal government forcibly confiscating 90 percent of their taxable income every year, he says, but "a lot of millionaires" are pretty excited to pay their "fair share."  First of all, the rich already shoulder an extraordinary share of the federal tax burden.  Second, millionaires who've decided they've earned enough money are more than welcome to voluntarily pay a "fairer" share of their income to the federal government, which would be the principled course of action.  Why wait around for Congress to impose your values on other people when you can be writing fat checks to Uncle Sam today?  Lead by example, people.  That suggestion is "preposterous on its face," they'll retort, without really explaining themselves.  Finally, maybe someone should acquaint Sen. Sanders with a Mr. and Mrs. Bill Clinton, who theoretically share his fairness fetish -- so long as they can still pay smart people to concoct legal tax avoidance schemes to shield their money from the government's grasp.  Oh wait, it seems as though Bernie has already heard of them:


As I've stated on several occasions, the Clintons' legitimately-earned wealth should draw criticisms from class warriors like Sanders, not from conservatives. But it sure seems hard to authentically run as a "champion of everyday Americans" when you're deleting emails from your rules-shattering private server, simply losing track of millions of dollars, failing to report and disclose massive foreign donations, and setting up "pass through" corporations that obscure some of your (undisclosed) family earnings. That's especially true when your list of public speaking demands entails private jet specs, and when you publicly admit that you haven't driven yourself in nearly two decades.  Anyway, watch last night's clip and marvel at the fact that this disheveled grandpa may well be Hillary's most serious "competition" for the Democratic nomination.  A man who's prone to careening into rants about things like the immorality of deodorant choices when there are kids starving in the world, or whatever.  I'll leave you with Team Bernie's Memorial Day tweet, which seemed like it was less about gratitude and remembrance than it was about reminding everyone who didn't vote for the Iraq war, unlike you-know-who:


Americans actually are prepared to help our veterans, which is why the existence of the VA is strongly supported on a bipartisan basis.  Our returning warriors have earned our help.  The problem for people like Bernie Sanders is that the VA has been exposed as a microcosm of the government-run system they aspire to inflict upon the nation writ large -- and it's a corrupt, unaccountable disaster.  And no, Senator, the solution isn't "more money."