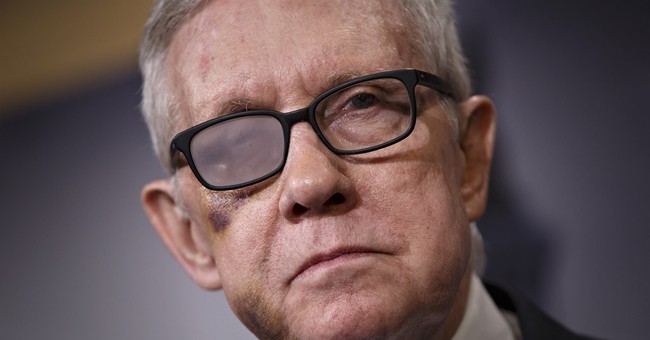 New week, same radical obstructionism from Senate Democrats, who continue to block a vote on legislation aimed at stopping human sex trafficking and helping its victims. As the upper chamber gavels into session, Democrats appear poised to obstruct the bill for a sixth time. At issue is a common provision within the bill barring public funds from flowing to pay for elective abortions, which Democrats claim to have "discovered" at the last minute, prompting their opposition. Every single argument they've advanced fails to hold water, for reasons we covered in detail here and here.  In short, Democrats are now attacking a bill that many of them co-sponsored, and which received zero dissenting votes in committee.  Its language has been publicly available for months, and Democrats were alerted to the ostensibly unacceptable item late last year.  Proponents of the filibuster have advanced three additional arguments in defense of Democrats' hardball tactics -- which come at the behest of the extreme abortion lobby, and at the expense of trafficking victims:

(1) Sen. Dick Durbin, last heard from casually tossing about race-based slanders, went the theatrical route, dramatically demonstrating that all Republicans must do to secure Democrats' support is to remove a single sentence from the bill:

.@SenatorDurbin shows how easy it would be to pass human trafficking bill: just remove one sentence. https://t.co/AUFmM6hYDM

That single sentence is the one prohibiting public financing of abortion, of course, representing a widely popular restriction. Here's the irony of Durbin's "let's just remove this one line!" argument (aside from he and Reid's previous pro-life "principles"): Mitch McConnell offered Durbin's caucus a simple majority, up-or-down vote to amend the bill by doing precisely what Durbin is demanding. Given the opportunity to vote to strike that one "problematic" sentence, Team Durbin objected, rebuffing the formal vehicle for enacting the change upon which they're insisting.  In other words, they want the GOP to unilaterally capitulate, sparing their members from casting politically-unpopular votes in favor of public abortion funding.

(2) Some argue that the bill extends on traditional 'Hyde Amendment' protections because it applies the anti-abortion rule to a government-created pool of money funded by trafficking-related fines, as opposed to direct tax dollars.  This is proof, they say, that the debate isn't about accepted Hyde Amendment practices, but rather an expansion of them.  Setting aside the facts that public dollars are fungible, and that multiple Democrats have specifically referred to this as a Hyde Amendment issue (falsely stating that the current bill would make the abortion-funding provisions "permanent"), Republicans offered a compromise amendment that would tweak the legislation's funding mechanism to more clearly fall under the Hyde Amendment precedent.  Democrats, needless to say, blocked the offered accommodation.

(3) Other critics of the bill's Hyde Amendment-style language say that it blocks needed access to abortion for women who've been victimized by sex trafficking, some of whom may have been impregnated by the pimps and johns who enslave them.  Whether or not one views abortion as "health care," and whether or not one believes that an unborn child should be deemed expendable depending on how her life was created, this argument also falls short on the merits:

The Hyde amendment includes exceptions for abortion in the cases of rape, incest, and when the life of the mother is endangered.  Since the 1990s, Hyde amendment restrictions on federal funding of abortion have included those exceptions, and so does the bill to combat sex trafficking. That means that any woman who becomes pregnant as a result of sex trafficking would be exempt from the bill's restriction on abortion funding. The New York Times does not dispute this, and neither does Eleanor Clift. What federal dollars could not pay for are elective abortions that fall outside of those exceptions.


Before you go, be sure to read Kevin Williamson's piece denouncing Democrats' betrayal of modern day sex slaves, assistance to whom is being "held hostage" (using Democrats' preferred nomenclature) by the whims of radical abortion special interest groups.  Matt also noted that some Democrats are also raising hackles over elements of an emerging bipartisan Medicare reform deal (relative small ball, compared to the program's insolvency problems), which they complain are insufficiently supportive of abortion.  That spat, bizarrely, pits "pro-life" Harry Reid against Nancy Pelosi -- with Reid adopting the more aggressive pro-abortion stance.  Big Abortion's big spenders are definitely getting their money's worth.