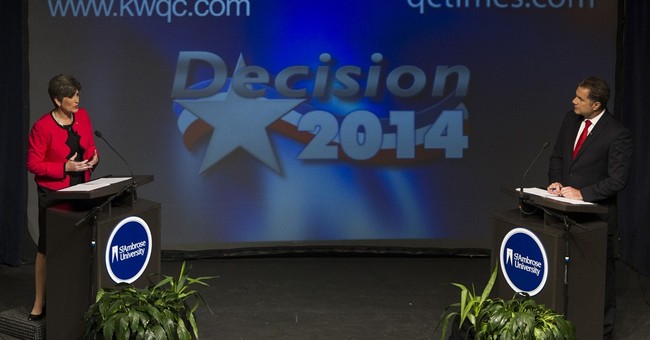 Iowa's Senate race is as tight as ever, according to a new Des Moines Register survey, with Republican Joni Ernst holding a slim one-point edge (47/46) over Democrat Bruce Braley. Ernst led in this polling series by six points last month, albeit with far more undecided voters. With three weeks to go, the contest is a dead heat. Ernst and Braley met in a televised debate on Saturday night, at which the Democrat tried to draw a bizarre connection between one of Ernst's GOP primary television ads and a terrible shooting in California:


"She was asked about her ad that she ran in the primary, where she was shooting a pistol into the camera, and saying 'let me take aim at Obamacare.' It came out right before the tragic shooting in Santa Barbara. She was asked if she regretted [the ad], and she called it an unfortunate accident. And I don't think it was an accident to the victims and their families."

This is, to put it charitably, revolting and demagogic garbage.  Ernst's ad was uploaded to YouTube on May 4, and it's just about the least menacing thing you'll ever see.  The Santa Barbara spree occurred weeks later, halfway across the country, and was perpetrated by a mentally unsound 22-year-old consumed by deadly misogyny.  Braley's ghoulish effort to connect the two was as clumsy as it was nonsensical.  A lighthearted political ad featuring an Iowa candidate shooting at the range had absolutely nothing to do with a deranged person's murder spree in California.  Of course the timing was an unfortunate, unrelated accident.  "Bruce Bailey" evidently disagrees, or he's at least willing to recklessly imply some sort of correlation here, in order to scurrilously link his opponent to bloodshed.  Truly vile stuff.  At another point in the evening, Braley was challenged on his views on guns.  He asserted that he's never met anti-gun billionaire Michael Bloomberg.  Republicans immediately began circulating one of Braley's own press releases touting his appearance at a 'No Labels' conference, where he was "joined by" Bloomberg:


Geraghty allows that perhaps Braley and Bloomberg were both at the same meeting but never actually crossed paths. That's plausible. But so far, Team Braley is oh-for-two regarding this little tale.  I'll leave you with Ernst pointedly reminding Braley of his demeaning comments about Sen. Chuck Grassley and Iowa farmers: