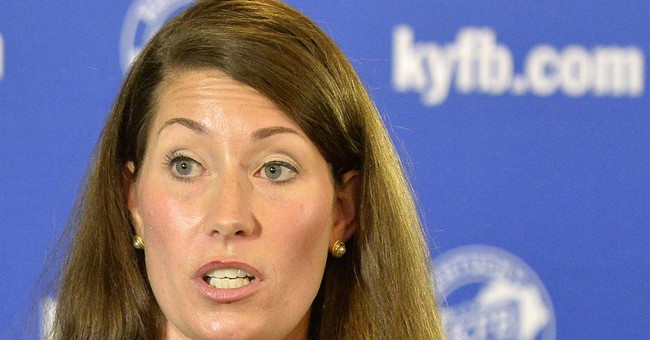 Christine wrote up James O'Keefe's latest hidden-camera video, which shows Democratic staffers and supporters in Kentucky candidly and confidently explaining how Senate candidate Alison Lundergan Grimes is misleading voters about her stance on coal.  The coal industry is a major employer in the state, and Sen. Mitch McConnell's campaign has devoted a lot of energy to painting Grimes as supportive of President Obama's aggressively hostile agenda. Grimes has responded by swearing up and down that she's a strong supporter of Kentucky coal, yet some of her most ardent liberal supporters are quite certain that she's simply saying what needs to be said.  In case you missed Christine's post, here's the video:


Grimes' pro-Coal campaign is all part of the "lying game," one Democratic operative confides. A staffer in the candidate's Lexington campaign office agrees: "She’s saying something positive about coal because she wants to be elected...And in the state of Kentucky, if you are anti-coal, you will not get elected, period, end of conversation.”  What's striking about the tone and content of these comments is that these supporters aren't disappointed in Grimes; they're thrilled that she's lying to the electorate in order to get elected.  "Once she gets in," another campaign organizer explains, Grimes will be "more realistic" about coal.  And there's the rub: Say whatever must be said to bamboozle voters, then fall in line with your ideological brethren once you get to DC.  It's the "moderate Democrat" way.  When the chips are down and the stakes are highest, they do what they're told because they're Statists at heart.  Thus emerges a major difference between the Republican and Democratic bases.

Conservatives expect their candidates not only to stand on principle (sometimes to a fault) but to shout their intentions from the rooftops.  Strategic evasions and efforts to delicately frame issues that may present problems with parochial electorates are frequently angrily renounced as betrayals of the cause.  Liberals, by contrast, understand that many of their ideas would be unpalatable to centrist voters if stated explicitly, so they're willing to tolerate -- if not openly encourage -- many of their candidates to talk a center-Right game on the trail.  He doesn't really mean that, but he has to say it, because most voters aren't as enlightened as we are.  We see this time and again.  Feel free to campaign as a "pro-lifer" in a pro-life state, as long as you veto the pro-life bill when it crosses your desk.  Feel free to "oppose" same-sex marriage, as long as you "evolve" to your true position right quick once the coast is clear.  Feel free to vow to oppose healthcare bills like Obamacare, or make reassuring promises that you know can't be kept, as long as you cast that crucial deciding vote when it's go time.  That's why Democrats are perfectly content that Michelle Nunn is lying about not being sure whether she'd have voted for Obamacare in Georgia.  That's why Democrats are delighted that Democrat-turned-independent Greg Orman is holding open the possibility of caucusing with Republicans if elected to the Senate.  Deceiving voters is a feature, not a bug.

As for the actual value of this type of video, I wouldn't be surprised if oppo-research types could extract embarrassing, damaging quotes from low-level staffers and volunteers from every single campaign in America.  Hardcore people tend to populate the grassroots on both sides, and hardcore people are likely to hold passionately-held beliefs that candidates and campaigns would likely prefer that they not articulate.  We'll see if O'Keefe and company are kicking off a new trend in the 'tracker' wars.  Also note his tease that this clip is just the first in a string of videos he'll release over the next few weeks.  Stay tuned.  In the meantime, is Grimes pulling slightly ahead in Kentucky?


Polling averages have given a steady lead to McConnell for months, but two surveys in one day show her as at least competitive.  Outliers, or should Team Mitch be worried?  If Grimes is surging -- and I'm still skeptical -- we'll see if the coal video blunts her momentum.  The McConnell camp is already blasting her over it.
It Looks as Though Jill Biden Has Found Her Legislative Focus
Beth Baumann
Why Four Democrats Are Suddenly Regretting Supporting Joe Biden
Beth Baumann
Judge: Virginia's 'No Postmark' Rule Change for Ballots Violated the Law
Matt Vespa