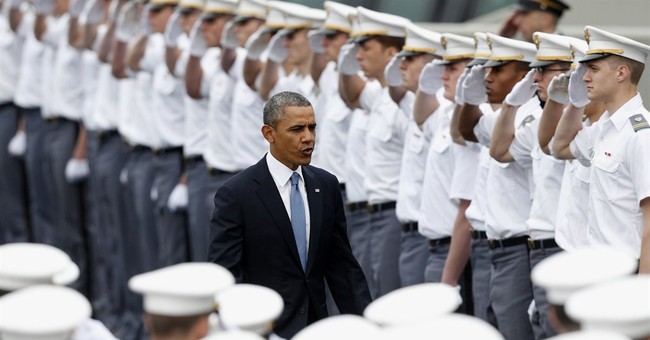 The cadets weren't about to overtly disrespect their Commander-in-Chief, of course. They're too disciplined and honorable for that -- and far too classy to even dream of a tantrum like this. But their notably muted enthusiasm tells the story, via the Washington Times:

President Obama was welcomed by the Black Knight of the Hudson for his speech at West Point on Wednesday, but less than 25 percent of the cadets gave him a standing ovation upon his introduction, the Daily Mail reported. “Receiving tepid applause and a short standing ovation from less than one-quarter of the audience upon his introduction, Obama argued for a contradictory foreign policy that relies on NATO and the United Nations while insisting that ‘America must always lead on the world stage,’ the paper reported. During his speech, which the Wall Street Journal called “consistent with that of every post-Cold War administration,” the president also took a swipe at critics, saying: “I believe in American exceptionalism with every fiber of my being. But what makes us exceptional is not our ability to flout international norms and the rule of law; it’s our willingness to affirm them through our actions.”


That wasn't just a swipe at his critics; it was an attack on the previous administration, too. Obama's politicking didn't sit well with the West Point crowd, according to a CNN analyst:

CNN military analyst observed Obama wasn't a "commander-in-chief speaking to his troops," got "icy reception" from West Pointers as result


Perhaps the audience wasn't enamored with the president's drastic proposed defense cuts, presented just in the nick of time. On a more substantive level, Obama's commencement address failed to impress observers from across the political spectrum, including the Washington Post's editorial board -- which has grown increasingly critical of the administration's foreign policy:

President Obama has retrenched U.S. global engagement in a way that has shaken the confidence of many U.S. allies and encouraged some adversaries. That conclusion can be heard not just from Republican hawks but also from senior officials from Singapore to France and, more quietly, from some leading congressional Democrats. As he has so often in his political career, Mr. Obama has elected to respond to the critical consensus not by adjusting policy but rather by delivering a big speech. In his address Wednesday to the graduating cadets at West Point , Mr. Obama marshaled a virtual corps of straw men, dismissing those who “say that every problem has a military solution,” who “think military intervention is the only way for America to avoid looking weak,” who favor putting “American troops into the middle of [Syria’s] increasingly sectarian civil war,” who propose “invading every country that harbors terrorist networks” and who think that “working through international institutions?.?.?. or respecting international law is a sign of weakness.”


Obama felling straw men left and right in an effort to boost his political position while grossly mischaracterizing his opposition? Perish the thought. WaPo's editors summoned the intellectual honesty the president evidently lacks:

Few, if any, of those who question the president’s record hold such views. Instead, they are asking why an arbitrary date should be set for withdrawing all forces from Afghanistan, especially given the baleful results of the “zero option” in Iraq. They are suggesting that military steps short of the deployment of U.S. ground troops could stop the murderous air and chemical attacks by the regime of Bashar al-Assad. They are arguing that the United States should not be constrained by Cyprus or Bulgaria in responding to Russia’s invasion and annexation of parts of Ukraine. To those doubters, the president’s address offered scant comfort.

UPDATE - Obama's speech was also panned by the New York Times, the Chicago Tribune, and the Wall Street Journal -- left, center and right. The man, for once, is a uniter.