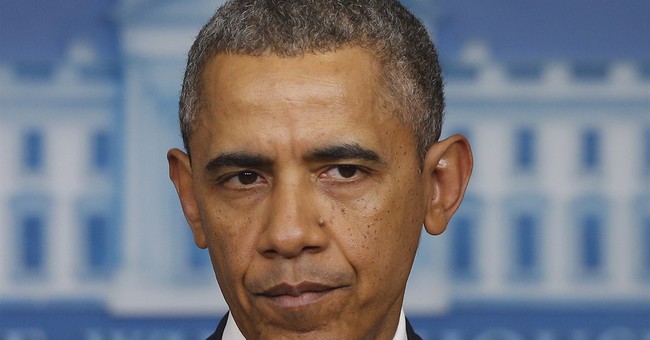 A stinging rebuke from a prominent editorial board that twice endorsed Barack Obama for president (and, I'd wager, would do so again):


For five years, President Obama has led a foreign policy based more on how he thinks the world should operate than on reality. It was a world in which “the tide of war is receding” and the United States could, without much risk, radically reduce the size of its armed forces. Other leaders, in this vision, would behave rationally and in the interest of their people and the world. Invasions, brute force, great-power games and shifting alliances — these were things of the past. Secretary of State John F. Kerry displayed this mindset on ABC’s “This Week” Sunday when he said, of Russia’s invasion of neighboring Ukraine, “It’s a 19th century act in the 21st century.” That’s a nice thought, and we all know what he means...Unfortunately, Russian President Vladimir Putin has not received the memo on 21st-century behavior. Neither has China’s president, Xi Jinping, who is engaging in gunboat diplomacy against Japan and the weaker nations of Southeast Asia. Syrian president Bashar al-Assad is waging a very 20th-century war against his own people, sending helicopters to drop exploding barrels full of screws, nails and other shrapnel onto apartment buildings where families cower in basements. These men will not be deterred by the disapproval of their peers, the weight of world opinion or even disinvestment by Silicon Valley companies. They are concerned primarily with maintaining their holds on power.


Especially interesting is the Post's passing reference to President Obama's recently-announced plans to dramatically -- "radically," in these editors' judgment -- decrease the size and capability of the United States military. Those proposals were unveiled exactly one week ago, five days before Putin's forces invaded Ukraine. The merits and specifics of downsizing and reshaping America's armed forces should be examined and debated, but the timing of this controversy fuels a calcifying narrative: America has embarked upon a self-guided path to decline, and the world is taking notice. The core "fantasy" of Obama's international posture is that moral preening, a softer touch, and obsequious deference to the oft-touted "international community" would telegraph a "we're not Bush" message to the world -- and that the world would embrace them for it. We'd be loved again, thanks to the goodness in our hearts and the power of Obama's rhetoric. Such is the thrust behind "smart power," the centerpiece of which, alas, was the spectacularly failed Russian reset. Thus, what is evidently enough to earn a Nobel Peace Prize from star-struck Europeans does little to soften malevolent global actors. In some cases, it does the opposite. The Post's editors continue:


Since the Syrian dictator crossed Mr. Obama’s red line with a chemical weapons attack that killed 1,400 civilians, the dictator’s military and diplomatic position has steadily strengthened. The urge to pull back — to concentrate on what Mr. Obama calls “nation-building at home” — is nothing new, as former ambassador Stephen Sestanovich recounts in his illuminating history of U.S. foreign policy, “Maximalist.” There were similar retrenchments after the Korea and Vietnam wars and when the Soviet Union crumbled. But the United States discovered each time that the world became a more dangerous place without its leadership and that disorder in the world could threaten U.S. prosperity. Each period of retrenchment was followed by more active (though not always wiser) policy. Today Mr. Obama has plenty of company in his impulse, within both parties and as reflected by public opinion. But he’s also in part responsible for the national mood: If a president doesn’t make the case for global engagement, no one else effectively can.


The Syria misadventure is acutely relevant today. Vladimir Putin essentially ran that show, siding with Assad, conveniently pretending to respect the United Nations and international consensus as sacrosanct, and baiting the US into embracing an accidental "solution" that ultimately strengthened the regime in Damascus. The Syrians, meanwhile, have failed to live up to their end of the disarmament bargain, and Moscow continues to run interference on Assad's behalf. President Obama drew a line in the sand, vacillated once that line was breached, and ended up doing virtually nothing at all. Putin witnessed America and Western Europe's fecklessness and indecision firsthand, and concluded that the coast was clear to start flexing Russia's muscles, in violation of international law. Putin reasoned that if the West wouldn't follow through on its tough words against a rogue regime using chemical and conventional weapons to slaughter its own people by the tens of thousands, the free world's bluster would be equally empty if the Russian military invaded a neighboring country for the second time since 2008. While the Obama administration appears to be preparing to take (non-trivial) action to isolate Putin and pressure his government, some Ukrainians may be wondering what happened to the Budapest Memorandum. That's the 1994 agreement (signed by the US, UK, Russia and Ukraine) stipulating that in exchange for handing over its Soviet-era nukes, Ukraine received security guarantees from the other signatories.

As I mentioned earlier, the Obama administration reaffirmed America's commitment to defending Ukrainian sovereignty under the treaty as recently as 2010, stating: "The U.S. recognized Ukraine’s unique contribution to nuclear disarmament and reconfirmed that the security assurances, recorded in the Budapest Memorandum with Ukraine of December 5, 1994, remain in effect." Virtually nobody in American politics has any appetite for a military intervention in Crimea. Nevertheless, concerns are mounting that the currency of America's word is being badly eroded. This administration canceled long-planned weapons systems in Poland and the Czech Republic as part of its elaborate and failed effort to favorably "reset" relations with the Kremlin. It effectively erased a presidential "red line" over the barbarity of a Middle Eastern thug. And the extent to which it will uphold the Budapest Memorandum in any meaningful way remains to be seen. Our friends and adversaries are watching. Diplomacy often entails the hard work of heading off armed conflict, and in order for it to succeed, its practitioners must command trust and credibility. The Budapest Memorandum was hailed as a triumph of diplomacy because it furthered the goal of nuclear disarmament. Ukraine was willing to forfeit a powerful deterrent because it believed that the other parties would take their resulting obligations seriously. If foreign nations and leaders reach the determination that the United States talks a good game but won't follow through when push comes to shove, that perception severely undermines the efficacy of future diplomatic efforts, and may well make war more likely. Pointing out these difficult realities isn't a war cry; it is, however, a reminder that "weakness is provocative" is more than a cliche. It's a truism.

Samantha Power is ripping into Russia right now at the UNSC. #Ukraine #Crimea


Those are welcome developments, but will words move Putin? Let's see what action is taken. Also, a writer at the liberal New Republic magazine is acknowledging that Mitt Romney was right about Russia. And the Democrat/media machine that laughed at him were dangerously wrong.