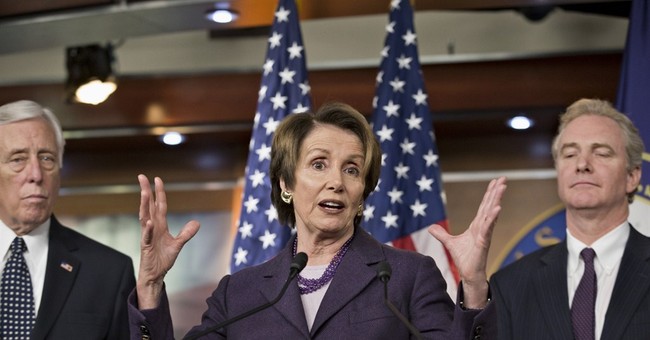 Late last week, Nancy Pelosi announced that House Democrats would decline to appoint members to the select committee on Benghazi -- temporarily, at least. She held out the possibility of Democrats participating if some of their demands are met, and proposed negotiations with Republicans. A split-the-baby option of assigning one or two members to the panel, but refusing to fill out the full five-member complement, reportedly remains on the table. Most of the concessions sought by Democrats are unreasonable. Republicans are not going to permit Democrats to veto Chairman Gowdy's subpoena requests, and they're not going to split the committee evenly between the two parties (the divide will be 7-5, in favor of the majority). In my conversation with the Weekly Standard's Stephen Hayes on Hugh Hewitt's radio program on Friday evening, however, Hayes suggested that the GOP might be wise to play ball on Democrats' appeal for more leeway in interviewing witnesses. It's a fair "ask." For their part, Democrats spent the Sunday chat shows trashing the inquiry -- yet they're still torn on whether or not to engage. I'd imagine they'd love nothing more than to boycott the entire thing to telegraph the extent of their comprehensive contempt for Republican efforts to ferret out the elusive truth regarding what happened on and around September 11, 2012 in northern Libya. But taking their proverbial ball and pouting on the sidelines carries inherent risks for the president's party. I addressed those potential pratfalls on Fox, listing three reasons why Democrats would be unwise to follow through on a boycott. All three bullet points are political in nature, which seems appropriate given Democrats' posture throughout the Benghazi debate:


Several CNN anchors dismissed the notion of a full-fledged boycott as "not even an option" earlier this morning:


Democrats' internal deliberations continue, spurring NRO's Jim Geraghty to quip, "there’s a certain sweetness in watching a cynical, ruthless political opposition frozen in indecision because they can’t decide which option is more politically advantageous." Meanwhile, Washington Post columnist Marc Thiessen -- who reported on President Obama's tendency to forego in-person security briefings, including on the day immediately following the Benghazi attacks -- recommends that the select committee track down the "President's Daily Diary." This document painstakingly records the president's every official movement and activity, and could help shed light on one of the enduring mysteries of the American response to the eight-hour terrorist attack: Where was the Commander-in-Chief?

There is another document that meticulously records all the president’s activities, public and private, every second of every day. It is called the “President’s Daily Diary.” Just outside the Oval Office is a room called the Outer Oval, where the president’s secretary and personal aide sit and through which all visitors coming to see the president pass. Staff members in the Outer Oval keep track of the president’s location at all times. They carefully record the names of all individuals who walk into the Oval Office — when they entered, how long they stayed, what the topic of discussion was. They keep a record of all calls made and received by the president, including the topic, participants and duration. They even record the president’s bathroom breaks (they write “evacuating” into the log). This and other data on the presidents’ whereabouts are collected by a career National Archives employee whose title is White House diarist. This individual preserves them as a minute-by-minute historical record of the presidency for future use by presidential scholars. What this means is that there exists a minute-by-minute record of where the president was and what he was doing for all eight hours of the Benghazi attack. So how is it that the White House has failed to give a full account of the president’s whereabouts during that eight-hour period?


In his snippy and rude exchange with Bret Baier, former NSC official Tommy Vietor confirmed for the first time that Obama was not in the White House situation room that night. Thiessen thinks Americans have a right to know where he was, and what he was doing while Americans were under siege abroad. We know what he did the very next day. I'll leave you with Trey Gowdy striking the appropriate tone regarding the charge and attitude of Republican investigators moving forward: