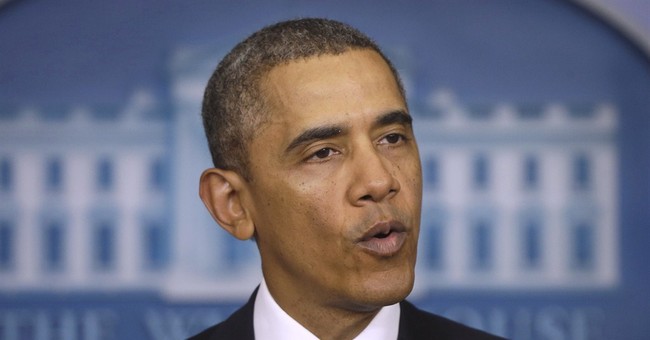 President Obama addressed the White House press corps today, announcing that with the final numbers in, Obamacare's exchanges have attracted eight million sign-ups -- 35 percent of whom are "under the age of 35," he said. Several elements of his comments were misleading:

(1) At first blush, the 35 percent stat is both significant and impressive. As recently as last month, the share of "young invincibles" signing up for plans was struggling in the 25 percent range, far short of the actuarial target of nearly 40 percent. A leap into the mid-30's, while still shy of the goal, would constitute a major step, and would bode well for the risk pools' sustainability. Alas, the president was lumping children in with this group, wildly inflating the number. Among the actual key demographic (18-34), the accurate number is...28 percent. So despite the big enrollment spike at the deadline, not nearly enough of those people were young adults to move the relevant needle.


(2) As we've explained repeatedly, the number of so-called "sign-ups" does not accurately reflect the number of people who have actually secured coverage, which requires paying the first month's premium. Delinquent payments are deleted by insurers, and people who selected (but didn't pay for) those plans are not covered. Experts have estimated that roughly 20 percent of "enrollees" fall into this category, a ballpark figure that even Kathleen Sebelius has acknowledged. And the numbers vary from state to state. In California, the nonpayment rate is 15 percent. In Delaware, it's 37 percent. In South Carolina, it's 43 percent. If the one-fifth delinquency estimate is accurate, the number of paid enrollees through Obamacare marketplaces is 6.4 million. That total is higher than I thought it would be, but it's still short of the original goal.


(3) The official percentage of those 6.4 million enrollees who previously lacked coverage -- a crucial number in measuring the law's success -- is unknown. Three outside surveys peg it at somewhere between 25 and 33 percent. Applying the high end of that range (to be generous), the math would work out to 2.1 million newly insured Americans. The president glossed over these realities in his remarks, merely stating that people were gaining coverage "for the first time, in many cases." He neither offered, nor was asked, to expound on any enrollment data specifics. Of course, tracking the law's efficacy in reducing the ranks of the uninsured will be doubly difficult thanks to the Census Bureau's White House-suggested and -approved methodology change. For those of you who read this analysis, you'll be unsurprised to learn that the president again falsely attributed the recent (and ending) health costs slowdown to his law.


(4) The torpid crew of reporters (at least those who were called upon) who asked questions regarding Obamacare uniformly stuck to superficial politics and process fluff. In response to these gimmes, Obama issued a now-familiar declaration: This! Debate! Is! Over! He did allow that not everyone is a fan of the law -- a gross understatement -- but puzzled over why Republicans continue to rudely and myopically oppose a policy that was railroaded through Congress without their consultation, against the will of a majority of the public, and that remains unpopular to this day. 'Tis a great mystery. Obama also suggested on several occasions that enduring opposition was rooted in "spite" directed at him personally. As if no viable policy arguments against, say, expanding Medicaid exist. Speaking of which, he also claimed that states would be responsible for "literally zero" of the price tag associated with expanding Medicaid. That's demonstrably false -- a fact I pointed out on Twitter before effectively being told to shut up by a quasi-prominent Obamacare defender.


(5) Finally, in response to one of the aforementioned terrible questions, the president recommended that his party robustly defend Obamacare, while simultaneously averring that it's time to "move on" and deal with other issues. A telling contradiction. We love Obamacare and will defend it passionately, but it's imperative that we change the subject! The American people, he said, are more interested in more jobs, a growing economy, and improving wages than re-fighting the Obamacare battle. Perhaps he's unaware that the latter is empirically impeding the former litany of goals he laid out. Perhaps not. The important message is that Obamacare is working, resistance is futile, and we ought not waste our energy on it anymore. Tell that to these widows, or to this poor woman:


After receiving her new health coverage in January through the New York State of Health Marketplace, Arden Heights resident Margaret Figueroa, 49, who suffers from two chronic illnesses, went to her pharmacy to fill her prescriptions. Although her insurance company, EmblemHealth, assured her she was covered, her insurance card was denied. While she had signed up for new health coverage -- because her insurance carrier dropped her old plan -- the company's internal paperwork apparently wasn't filed. She also learned that all her long-time doctors didn't accept the new insurance plan. For Ms. Figueroa, who suffers from a rare neurological disease called Arnold Chiari Malformation and Syringomyelia, this has led to three months of excruciating pain, withdrawal symptoms and immobility. "It's hard," said Ms. Figueroa, through her tears Wednesday at a press conference at Rep. Michael Grimm's (R-Staten Island/Brooklyn) New Dorp office. "I have been in pain. I've been vomiting. I lost 22 pounds. The pain is unbearable. My medication helps me function during the day," added Ms. Figueroa, who has undergone four brain surgeries for her conditions, which require her to take numerous amounts of medication.


Silence, subject! The debate is over. And horror stories like yours have been "debunked" by Harry Reid and the media -- a "fact" that the president helpfully mentioned today, in an effort to minimize the financial and medical hardships his signature law is inflicting on millions of people.