President to Subjects: Obamacare is Working, and the Debate is Over 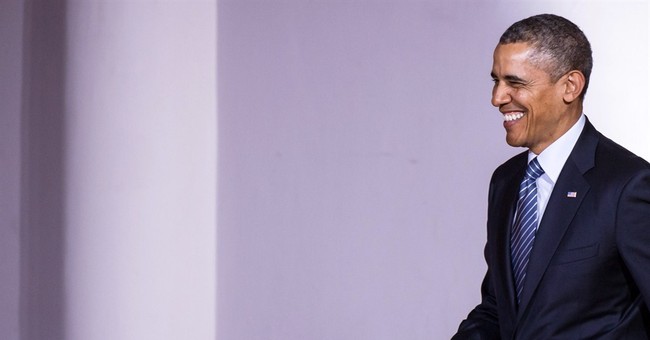 President Obama's (second) "Mission Accomplished" pep rally on behalf of his unpopular signature accomplishment was as shrill, demagogic and dishonest as one might expect. Especially insulting was his feigned confusion over why Republicans are so "angry" about people getting healthcare. Yeah, that's it. People aren't angry about millions of consumers losing the preferred coverage and doctors after being misled by Democrats' "lie of the year." People aren't furious over steep premium increases and shocking out-of-pocket costs. They're not upset that their hours are being reduced, or that the taxpayer-funded "cost curve" has been bent up, or that their new coverage options are severely limited. No, they're mad that some individuals are gaining coverage, or whatever. This president routinely seems pathologically incapable of making an intellectually honest argument -- let alone a generous one -- even as he celebrates himself as a pragmatic non-ideologue. He informed the public that when Healthcare.gov crashes again (which he concedes will inevitably happen) it "won't be news," and declared the debate over repealing the harmful law "over." Voters may see things differently this fall. Also precious was Obama's mind-bending commentary about how, unlike the other side, Obamacare supporters didn't undertake a big budget PR campaign to make a hard sell to the public. Apparently taxpayer money doesn't count. As I wrote yesterday, there's no sense in freaking out over the latest expression of Obama's trademark smug mendacity. Yesterday's address was yet another speech in an endless string of words on the subject, and Barack Obama's words passed the "diminishing returns" threshold long ago. If Democrats get any bump out of their manufactured triumph at all, perhaps they'll be emboldened to celebrate the law even further, which will come in handy when the next bouts of bad news hit. And they will hit. This sums things up pretty well:

Calm down, Republicans. The president just ensured that this thing will be in the news today http://t.co/VVjeYPRtqG pic.twitter.com/qV4ebaM4ok


Privately, White House officials are telling journalists that there isn't much they can do to change perceptions of Obamacare over the remainder of his presidency -- so perhaps in that sense, the Obamacare debate is over. They lost:

In briefing for reporters earlier today, SAOs said there's nothing the WH can do to change opinions of the law while Obama is in office.


This law has been stubbornly unpopular since it was proposed. When the phony media fanfare and wild applause from partisans fades away, the broken promises will still be broken, and the failures will still exist -- with millions of new victims on tap. So let him peddle this mirage. He's been trying and failing for years. Mission accomplished: