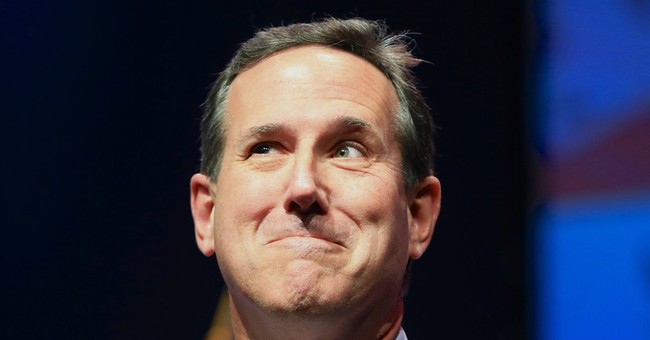 Somewhat bizarrely, former Pennsylvania Sen. Rick Santorum (R) agreed to give his first television interview as a presidential candidate to ABC News' George Stephanopoulos. (Read this, this, and this if you think Stephanopoulos is an objective, fair-minded journalist). In any case, after complaining that Fox News was treating him unfairly after the network announced their imperfect new debate rules, he spoke to Stephanopoulos exclusively on Wednesday about why he’s running again—and why he thinks the outcome will be different this time (despite the very long odds against him).

“I’m ready to do this again,” he intoned. “To come back home, to be at a manufacturing facility, to really reconnect to what I grew up with and understood to be an America that worked.”

He explained that the “74 percent of Americans” who never graduated from college are falling behind, and indeed, really struggling to get ahead. And thus because of his roots, and his commitment to blue collar conservatism, he hopes to bring these issues to the fore in the campaign ahead.

But he also justified his candidacy on more pragmatic grounds. After all, he said, he will be much better funded than he was four years ago.

“Number one, we’re going to have some more money—that really helps,” he said. “Obviously, we learned something from the last campaign: You got to do well in Iowa.”

Santorum, for his part, did do well in Iowa—winning it belatedly in 2012. He won almost a dozen states, too. But if he hopes to climb his way to the nomination, he'll need to broaden his base of support beyond traditional marriage supporters and pro-lifers.

Can he do it? Perhaps, my friends, he already is.

“Hillary Clinton and big business, they have called for a massive influx in unskilled labor,” he told a roomful of supporters yesterday in Butler County, Pennsylvania during his first-ever 2016 campaign rally. “Their priority is profits."

"My priority is you, the American worker,” he added.