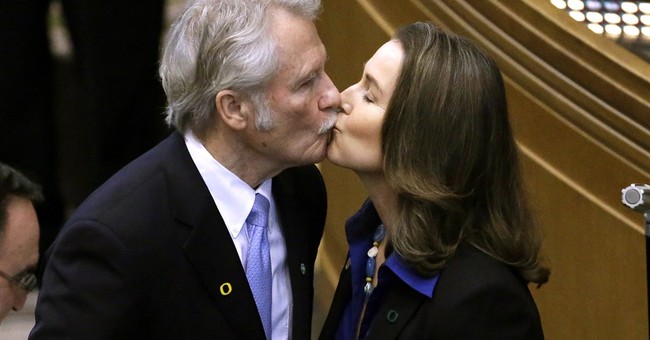 Reports of an impending resignation have been simmering for days. Will the announcement finally come this afternoon?

We reported Wednesday that embattled Gov. John Kitzhaber (D-OR) seriously considered stepping down earlier in the week before having a change of heart. Now, however, his departure is expected perhaps within the hour:

As it happens, the scandal is so “untenable,” even Democrats are hanging him out to dry:

"Oregon deserves a governor who is fully focused on the duties of state," Treasurer Ted Wheeler said in a statement. "Unfortunately, the current situation has become untenable, and I cannot imagine any scenario by which things improve."

House of Representatives Speaker Tina Kotek and Senate President Peter Courtney, both Democrats, met with Kitzhaber on Thursday and urged him to resign. A Courtney spokesman said the governor, in response, was "upset" and "defiant."

Still, the Wall Street Journal provides some much-needed context for why the governor is running out of options -- and time:

Oregon Gov. John Kitzhaber is facing a mounting political crisis, as influence-peddling allegations involving his fiancée have spurred a criminal investigation by the state’s attorney general and calls for his resignation from leaders of his own Democratic Party.

Just months after being re-elected to a record fourth term, Mr. Kitzhaber is under pressure to step down following media reports that his fiancée, first lady Cylvia Hayes, was being paid to represent an array of interest groups at the same time that she was helping formulate policies in his administration that involved those groups.

Pressure to resign only intensified, of course, after the governor was caught attempting to cover his tracks by demanding the deletion of incriminating personal emails, though he maintains his innocence. Politicians never learn, do they?

We’ll see if he ends up resigning. Tick tock.