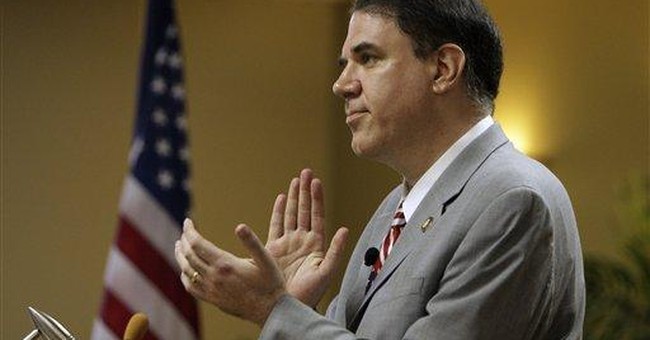 Despite his questionable fundraising tactics, ludicrous assertions about Republicans, and legal troubles, Rep. Alan Grayson (D-FL) is reportedly considering a US Senate run in 2016. The Hill reports:

In an interview with The Hill on Tuesday, Grayson said he’s thinking about running. The often-controversial Democrat spoke at length about why he’d begin a potential Senate race in position of strength, whether he’s going up against Sen. Marco Rubio (R-Fla.) or not.

“We have some very substantial advantages,” Grayson said in an interview with The Hill on Tuesday. “I have over 100,000 individual contributors, no one else on the House Democratic side has anything like that. We have raised as much as $5 million in an individual cycle for a House seat, again there’s nobody [who has done that].”

He also touted his legislative record and electability -- but suggested he'd defer to Rep. Debbie Wasserman Schultz (D-FL) if she desires the seat (which apparently she does).

Nonetheless, he might have bigger hurdles in his way than DWS:

Grayson has said that the Republican healthcare plan is to “don’t get sick” but to “die quickly” if you do. He’s said that he has trouble listening to former Vice President Dick Cheney when he speaks because of “the blood that drips from his lips when he’s talking.” And he’s called Republicans “foot-dragging, knuckle-dragging Neanderthals.”

And so on and so forth. He’s one of the most polarizing political figures in Washington. Still, his distaste for Republicans aside, he’s shown a remarkable ability to bounce back from humiliating electoral defeats. But because he has (deservedly) earned the wrath of conservatives and moderate Republicans alike, I do wonder how he could possibly appeal to voters beyond his center-left base.

If, however, Wasserman Schultz gives him the go-ahead (and Rubio runs for president against the wishes of his constituents) the seat would be wide open.

That, it seems, would be too enticing a prospect for him to ignore or pass up.