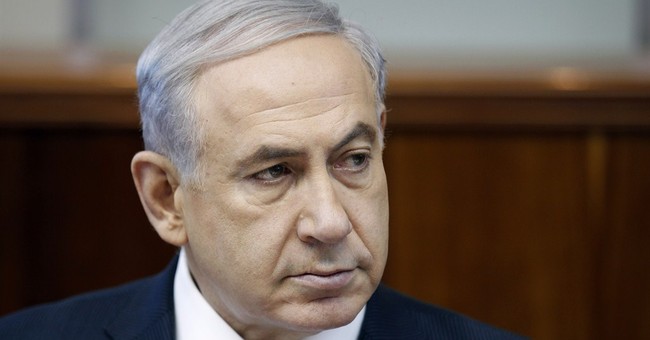 On Thursday, mere days after a cease-fire agreement between Israel and Hamas fell through, the Israeli government announced they were deploying ground troops into the Gaza Strip:

Israeli forces on Thursday launched a ground offensive in the Gaza Strip, the military said.

The operation came after 10 days of intense fighting between Israel and the Islamic militant Hamas, in which Israel hit more than 2,000 targets in Gaza and Hamas launched nearly 1,500 rockets at Israel.

BREAKING NEWS: A large IDF force has just launched a ground operation in the Gaza Strip. A new phase of Operation Protective Edge has begun.

The Israeli prime minister himself evidently green lighted the operation:

The Israel Prime Minister's Office has released a statement confirming that Netanyahu has ordered the IDF to launch a ground offensive.

The reason for the invasion? To take out Hamas's "underground terror tunnels."

Or perhaps this had something to do with it:

A statement from the Israeli military said the operation will include "infantry, armoured corps, engineer corps, artillery and intelligence combined with aerial and naval support."

Before dawn on Thursday, about a dozen Palestinian fighters tunnelled under the border, emerging near an Israeli community. At least one was killed when Israeli aircraft bombed the group, the military said.

UPDATE: It's also worth noting that a temporary "humanitarian cease-fire" orchestrated by the UN was cut short today when three mortars were launched by terrorists into Israel.

View of an explosion following an Israeli strike in Gaza City pic.twitter.com/1Rr5aEvSUt

UPDATE: At least 48,000 Israeli reservists have been "called up" and ordered to report for duty, according to Politico. Furthermore, the offensive has been described as "open-ended," and will be initiated on multiple fronts.

Israeli forces have not stormed Gaza since 2009.