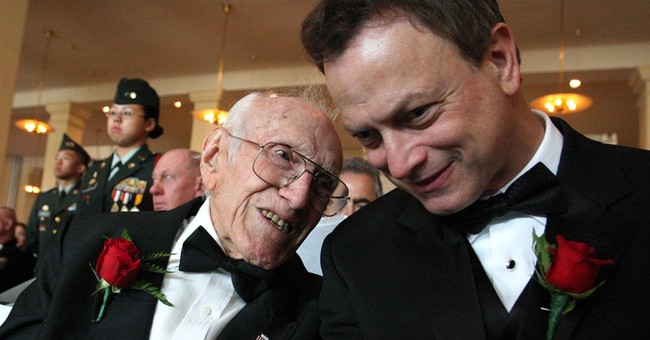 Who was Louis Zamperini? The New York Times has a succinct summary of who he was and what he did:

Louis Zamperini, an Olympic runner whose remarkable story of survival as a prisoner of war in World War II gained new attention in 2010 with the publication of a best-selling biography by Laura Hillenbrand, died on Wednesday in Los Angeles. He was 97.

A statement released by his family said he had been suffering from pneumonia.

Ms. Hillenbrand’s book, “Unbroken: A World War II Story of Survival, Resilience, and Redemption” recounted in vivid detail how Mr. Zamperini — a track star at the University of Southern California and an airman during the war — crashed into the Pacific, was listed as dead and spent 47 days adrift in a life raft before his capture by the Japanese. It rose to No. 1 on the New York Times best-seller list.

Universal Pictures purchased rights to the book. The film, directed by Angelina Jolie and starring Jack O’Connell as Mr. Zamperini, is to be released in December.

I read this book on my family vacation last February. I couldn’t put it down. I remember thinking to myself upon finishing it: How could one man endure so much pain and suffering and not succumb to feelings of hopelessness and despair? How did he survive? As noted above, he spent almost seven weeks floating aimlessly across the South Pacific without food or water after his plane went down. Most of his crew perished in the crash. When he finally did land on shore -- praying and hoping for deliverance -- he found himself on “Execution Island,” a prisoner of war to the Japanese for two excruciatingly long years, where he was singled out and repeatedly tortured because he was famous. And yet he lived to tell the tale, and later even forgave those who tormented him. Incredible. How many of us would find it in our hearts to forgive those who took pleasure -- and enjoyed -- making every single moment of our lives in captivity a living hell? Not many I suspect.

I’ll leave you with this: a CBS News segment from a few years back recounting Zamperini’s story, which included some exclusive interviews with the man himself:

“I think the hardest thing in life is to forgive. Hate is self-destructive. If you hate somebody, you’re not hurting the person you hate, you’re hurting yourself.”

A truly remarkable man. An American hero. May he rest in peace.