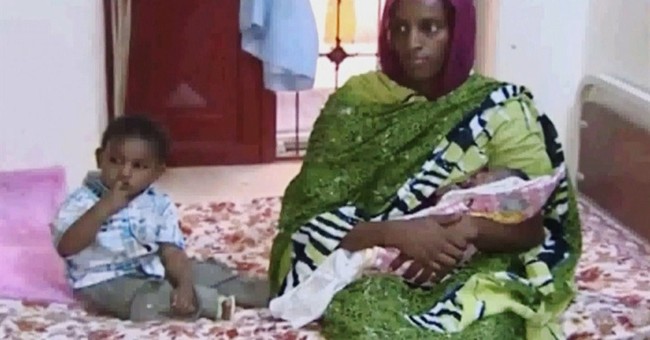 We’ve been following this case rather closely and the news is only getting worse. Though Meriam Ibrahim’s life was saved two days ago when Sudanese authorities invalidated her court-ordered execution for apostasy (that same day, incidentally, she was finally reunited with her family), she’s now been accused of fraud and banned from leaving the country indefinitely. The Daily Mail reports (via my colleague Ed Morrissey):

The Sudanese woman who was sentenced to death for being a Christian has been released from her latest detention but has been charged with new crimes, MailOnline can reveal.

Meriam Ibrahim has been accused of falsifying travel documents as she tried to leave the African country hours after the death penalty was dropped against her.

It is understood that the authorities told her she should have used the Muslim name she had when she was born, not the Christian name she uses after choosing to worship that faith.

It is not clear if her husband Daniel Wani, who is from Manchester in New Hampshire, has also been charged with any offenses.

The new allegations are a huge setback to Meriam's hopes of leaving Sudan and a further sign that the Sudanese government is playing twisted games over her release.

Meriam, a doctor, is on bail which was put up by a friend. She cannot leave Sudan until this matter is resolved as part of her bail conditions.

Perhaps out of spite -- and angry that the news of her deliverance is being celebrated all around the world -- the Sudanese government took matters into their own hands and trumped up charges against her to deny her any traveling privileges whatsoever. After all, the truth is that Ibrahim is not a Muslim and has never been one, despite what Sharia law might profess on the matter. She was raised in a Christian household. Period. Thus, simply failing to use her “Muslim” name when traveling is a ridiculous reason to detain her; it’s also a repudiation of a fundamental and essential human right: the freedom of worship.

In any case, yesterday we wondered when and if the US State Department would intervene to secure her and her family's release. On Tuesday, State Department Spokesman Marie Harf assured the public that the US government is doing everything they can to do just that. “We are engaging directly with Sudanese officials to secure their safe and swift departure from Sudan,” she said. But one wonders why this high-profile case wasn’t handled a little better. Tina Ramirez -- leader of the organization Hardwired, which, according to its website, seeks to "end religious oppression" -- told the Daily Mail that the whole episode has been handled poorly from the start:

Ramirez said: ‘The US government should have coordinated with the government of Sudan to get them out of the country. This is sloppy.

‘They have had three years to sort this out and whenever Daniel has gone to the U.S. embassy in Sudan for help they have refused.

‘I think that Congress should be investigating what happened here.

‘The US says that it cares about human rights issues and this is something they should be caring about. It’s a total failure, it’s shameful.’

Ramirez said it was a ‘good question’ as to why U.S. officials on the ground did not put Meriam and Daniel on their plane and make sure they were able to leave.

That’s especially true since her husband and two children are American citizens. Wasn’t there something the State Department could have done before the situation spiraled out of control? Sadly, Ibrahim and her young family (who quite honestly have already suffered enough) have now reportedly been placed in the hands of the National Intelligence and Security Services (NISS), which has a reputation for committing human rights abuses and engaging in torture in Sudan.

Prayers, diplomacy, and decisive action from Western leaders are what we need now more than ever.