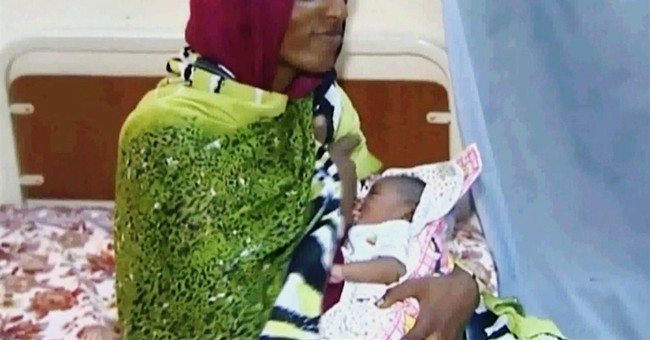 This is both heartbreaking and infuriating at the same time. Following the momentous news yesterday that Meriam Ibrahim was finally released from prison in Sudan -- and thus saved from death by hanging for the supposed “crime” of apostasy -- CNN is reporting today that she and her husband have been arrested at the airport as they were attempting to depart the country (via my colleague Ed Morrissey):

A Sudanese woman whose death sentence for refusing to renounce her Christian faith was revoked has been rearrested, her legal team told CNN Tuesday.

Meriam Ibrahim, 27, and her husband, Daniel Wani, were arrested Tuesday at an airport in Sudan's capital as they were trying to leave the African country, Ibrahim's legal team said.

Details about why the couple were arrested weren't immediately available.

Actually, the entire family has been detained -- including the couple’s two small children, according to their attorney Elshareef Ali Mohammed:

Mohammed, who was at the airport with Ibrahim, said the security forces did not give him a reason for her re-arrest, and made no reference to her dropped case even when he identified himself as her lawyer. He said Ibrahim had been taken to a detention center accompanied by her two children and husband Daniel Wani, who insisted on going with her. "I have no more information," he said. "They knew she had been cleared by the court but they have re-arrested her - I don't know why."

One can only imagine what must be going through their heads right now. In less than 24 hours, a family of four that was separated by forces beyond their control was joyously reunited, only to find themselves detained for no legal or specified reason by the Sudanese government. What is to become of them? The short answer is: we don’t know.

For what it’s worth, Daniel Wani is a naturalized American citizen and therefore so are his children. I wonder, then, as does Ed, will the State Department get involved right away -- and will the widespread and almost universal outrage that precipitated her release in the first place be reawakened? I hope so.