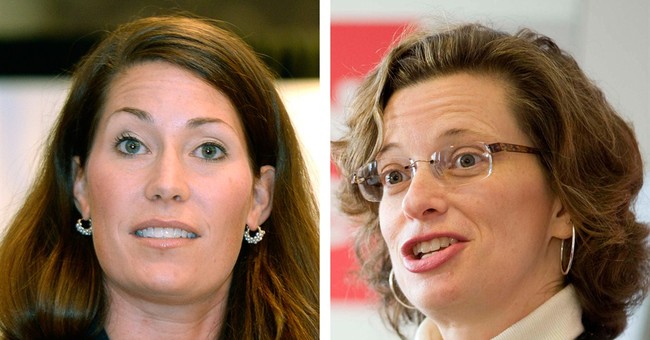 Senate hopefuls Michelle Nunn (D-GA) and Alison Lundergan Grimes (D-KY) refuse to say whether or not they would have voted for Obamacare, but evidently they aren’t straddling the party line on another brewing issue: the VA scandal. To wit, both candidates have now called for VA Secretary Eric Shinseki to tender his resignation.

Of course, going rogue directly violates the wishes of Bernie Sanders & Co., but in a tough election year, one’s own political considerations and interests must come first:

The Democratic Senate candidate in Georgia is joining a growing chorus calling for the resignation of Veterans Affairs Secretary Eric Shinseki in the wake of allegations of misconduct involving delayed treatment at the VA that may have led to 40 deaths.

“There is growing evidence that the Department of Veterans Affairs needs new leadership in order to reform its badly broken bureaucracy,” Michelle Nunn said in a press release, according to The Atlanta Journal-Constitution.

Nunn faces an uphill climb in a traditionally red state as she faces off against either businessman David Perdue or Rep. Jack Kingston, who are battling for the state's GOP nomination in July's primary runoff. Her fellow Democrats in the House, Reps. David Scott and John Barrow, have already called for Shinseki's resignation.

Nunn also follows a Democratic Senate challenger in another state, Alison Lundergan Grimes of Kentucky, in saying the VA chief should go.