Feinstein: This Was an 'Incomplete Investigation' 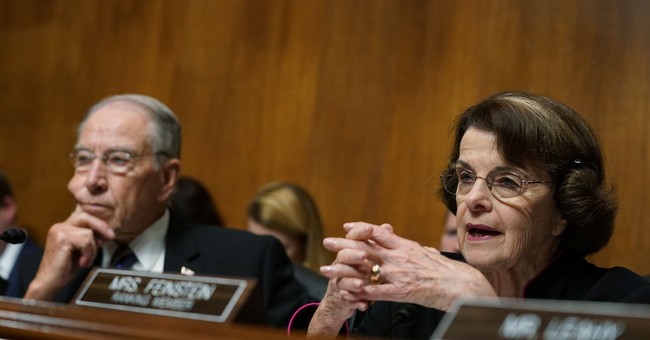 Democrats on the Senate Judiciary Committee have been briefed on the FBI investigation into Judge Brett Kavanaugh and have come to very different conclusions than Chairman Chuck Grassley. The Republican senator said the findings confirm that Kavanaugh's record is clean. However, "The most notable part of the report is what’s not in it," according to Sen. Dianne Feinstein (D-CA). She sounded off with fellow Democrats on Capitol Hill Thursday after being briefed on the FBI report.

The FBI did not interview Kavanaugh or his accuser Dr. Christine Blasey Ford, Feinstein noted. That's not fair and a judiciary committee hearing "should not be a substitute" for an FBI interview.

Senators "lack the expertise" of FBI agents, Feinstein said. Furthermore, they were only given five minutes to interview the nominee.

The FBI investigation itself was "very limited" in scope - and that appeared to be the White House's fault.

The White House "blocked access to millions of documents from Kavanaugh’s record, Feinstein charged, as well as 90 percent of his emails. While Democrats agreed that the investigation should be somehwat limited, they did not say that the White House "should tie the FBI’s hands."

"Our fears have been realized," Senate Minority Leader Chuck Schumer said after being briefed on the FBI report. "I disagree with Grassley that there was no hint of misconduct."

Schumer called for the documents, with proper redaction, be made public.

"Why shouldn't all of America see the facts?" he asked.

He too accused the White House of a cover up. The directive from White House Counsel Donald McGahn to the FBI shows the administration "greatly constrained the investigation from the get go."

Only one document was in there for 100 senators, Schumer added. It is another example of "constraining the ability of all senators and American public from seeing the truth."