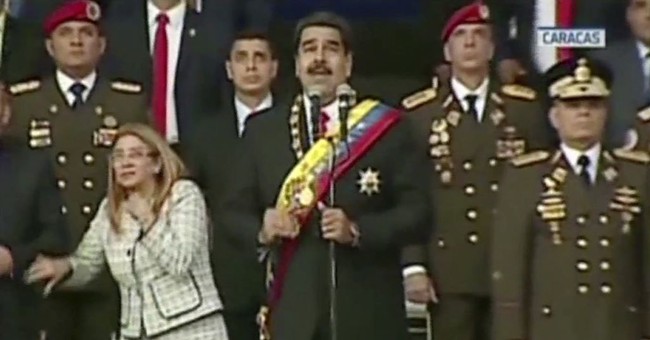 Venezuelan President Nicolas Maduro was speaking at a celebration of the 81st anniversary of the National Guard when multiple drone explosions sent bystanders fleeing and his security team surrounding him on Saturday. Maduro escaped unharmed, but seven National Guard soldiers were injured.

It was caught on camera.

Maduro immediately blamed his political opponents for the assassination attempt and six arrests have been made in the attack. The far right in both Venezuela and Colombia, along with outgoing Colombian President Santos, plotted the attack, Maduro charged.

Bolivian President Evo Morales is even blaming the United States. He sounded off on the supposed "Yankee Interventionism" on Twitter, pointing to supposed conspiratorial behavior stemming from the State Department.

On 07/20/17, then chief of the CIA, Mike Pompeo admitted efforts with Mexico and Colombia to foster a "transition" in Venezuela. Then, on 8/10/17, in the White House, Trump pressed his aides to invade Venezuela. The world is well aware of the plans of the US against Venezuela.

On 01/23/18, ex CIA head and current Secretary of State Mike Pompeo admitted the CIA gave Trump data on the Venezuelan financial situation and the relationship of our brother president Nicolas Maduro with the army before the US sanctions against Venezuela. Yankee Interventionism.

"Well, I can say unequivocally there is no U.S. government involvement in this at all," Bolton said. "Just within the past couple of hours, I have spoken with our charge in Caracas, the head diplomatic official down there. He and his staff were up much of the night making sure that Americans in Venezuela were safe."

Maduro became the Venezuelan president in 2013 and his rule has been a primer on the devastating consequences of socialism. His policies have resulted in starvation, desperation among the Venezuelan people. Maduro's re-election was condemned because the vote was rife with "irregularities," rivals charged. Maduro, who will rule for another six years, is expected to crack down on political dissent even more after this weekend's attack.