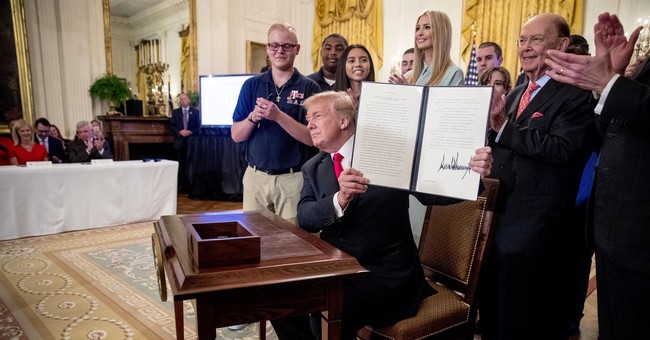 Lost in all the Russia news this week was President Trump's latest workforce initiative. On Thursday, he signed an executive order establishing the National Council for the American Worker.

Ivanka Trump, the president's daughter and senior White House advisor, is doing her best to get the word out about the effort.

This new initiative, she explained on "Fox & Friends" Friday, is "a call to action for the private sector." The parties participating in the new effort agreed to commit nearly 4 million new jobs, she eagerly noted.

.@IvankaTrump: "3.8 million jobs were committed to yesterday by the private sector with no government funding." pic.twitter.com/AFn9cWJkJd

The initiative will focus on skills training and education. They'll be reaching into high schools to train students for the workforce, while mid-to-late career workers will be trained in new skills.

Several major companies have already indicated they're ready to sign the pledge, Ivanka noted. Wal-Mart, agreed to 1 million enhanced career opportunities. Fed Ex agreed to 500,000. Apple said they wanted to honor the pledge, as did Boeing and Oracle.

Ivanka said that under the Trump administration, the economy has been booming and Americans have been finding more opportunities. She cited statistics from June that showed 600,000 workers entered or reentered the workforce. The current unemployment rate is 4 percent. It was 3.8 percent in May, which matched a 45-year low.