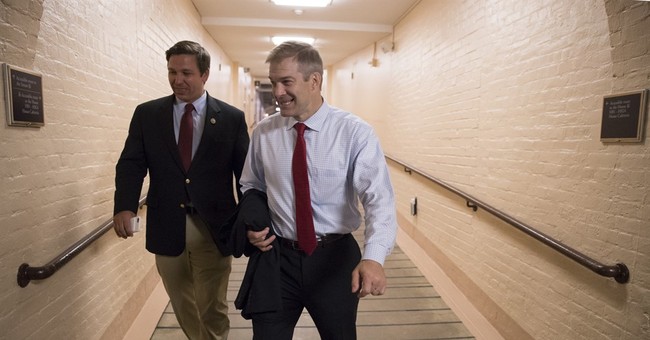 The House Freedom Caucus had often been a thorn in GOP leadership's side. Hoping to keep the party right of center, the conservative group of lawmakers has pushed back at several pieces of legislation they considered fiscally irresponsible. One of those lawmakers may be putting his money where his mouth is.

Earlier this month House Speaker Paul Ryan announced his impending retirement for personal reasons. GOP Majority Leader Kevin McCarthy and GOP Whip Rep. Steve Scalise (R-LA) appear to be the frontrunners to replace him, yet Rep. Jim Jordan (R-OH), a key member of the House Freedom Caucus, is also considering a go at it. He's been "encouraged" by his colleagues.

So, is Rep. Jim Jordan's hat going to be in the ring when Paul Ryan vacates his Speaker of the House role?

"I'm going to look at it very seriously," he says. https://t.co/63hJ9o1QGj pic.twitter.com/ZggqxLcgrc

"That's the kind of stuff that needs to change in the future" if they hope to still be the majority party in Congress, Jordan said.

No matter who becomes the next speaker, he or she would be wise to embrace the Freedom Caucus, according to Adam Brandon, the president and CEO of FreedomWorks.

We cannot fall into the trap of rushing the process and settling on a consensus candidate. Choosing a speaker based on the flawed criteria of “who upsets the status quo establishment the least” will only lead to more of the same. More massive spending bills, more blinking on health care reform, and more negotiating with ourselves rather than the Democrats.

Republican voters are paying attention. Moderate and left-leaning Republicans in Congress have already blown their credibility on spending, and as a result will be rejected by the fiscally conservative voting base of the GOP. (The Hill)

Speaker Ryan is still in the driver's seat, choosing to finish out his current term in Congress.