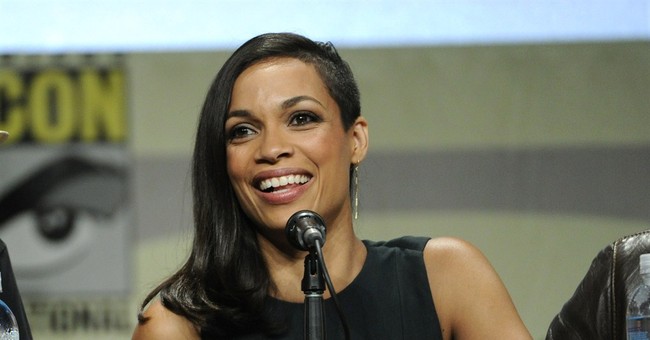 Rosario Dawson is one of Bernie Sanders’ biggest Hollywood supporters. The actress has introduced him at campaign rallies and lavished praise on his uber progressive agenda for the country. She also has not been afraid to speak out against power couple Hillary and Bill Clinton. At one of Sanders’ campaign events this weekend, Dawson reminded voters how the political duo likes to bully people, even invoking the infamous name of Monica Lewinsky to prove her point.

"We are literally under attack — not just for supporting the other candidate," the actress told a crowd in Wilmington, Delaware, as she introduced the senator, adding, "I’m with Monica Lewinsky on this … bullying is bad." Dawson also called it a Clinton "campaign strategy."

After the rally, CNN asked Sanders whether Dawson’s comments were appropriate. He deferred, instead choosing to talk about her impressive acting and “passion” for fighting for progressive causes. He also claimed not to be aware of the “context” of her remarks.

Another one of Sanders’ famous female fans, Susan Sarandon, has no problem telling voters what she thinks of the Clintons. In an interview with MSNBC's Chris Hayes, Sarandon suggested Donald Trump may even be a better fit for the White House than Hillary. Clinton is the “status quo” and her history with Wall Street proves she is not sincere when she claims to be a champion for the middle class, the actress insisted.

We may not all agree with Bernie Sanders and his celebrity surrogates on policy, but we can agree he is more sincere than Hillary when it comes to their policy platforms. (When exactly is she going to release those Wall Street transcripts?)

We can also probably find some common ground and agree that the Clintons are indeed guilty of engaging in aggressive and bullying political tactics.