Perry Shames Washington on Immigration: They Talk and People Die 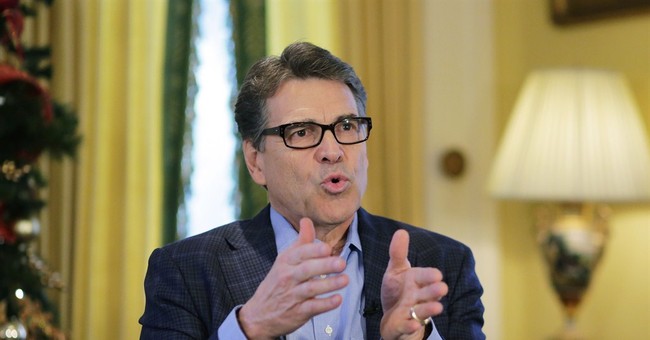 "At no time has the world been more dangerous," former Texas Governor Rick Perry said not long after he took the stage at this year's Conservative Political Action Conference in Oxon Hill, Maryland. Perry, who is rumored to run for president next year, had some bold words for the Obama administration and a Congress that has done little to secure not only our foreign security, but our own borders.

Perry, who served as Texas governor for 14 years, provided unwelcome news for the CPAC audience regarding America's shaky standing in the world, thanks to our weak leadership in Washington.

"We have entered a time of testing...we are failing," he said. The president, he continued, bows to political correctness and offers grave miscalculations in regards to the scope of our enemies.

"His incompetence in Iraq and Syria have allowed the rise of ISIS."

Perry said it is time for the American people to hear the truth, bluntly telling the CPAC crowd that ISIS wants an apocalypse and that we are not responding as we should.

"We didn't start this war, nor did we choose it," he said. "But we will have the will to finish it."

Just as dangerous, is how our enemies view us.

This Russian president, he said, has watched President Obama neglect to enforce his own red lines. It was conditions like those that allowed Putin to boldly enter Ukraine.

"Here's the simple truth: Our allies doubt us, and our adversaries are all too willing to test us."

No one, he added, should be surprised that dictators defy us. Why?

"Our president won't even defend the line that separates our border from Mexico," said Perry.

For America to be safer, our border must be secure, he declared. Washington is dangerously behind on this process. Tens of thousands of illegal immigrants are showing up on the border, he said, many of those being unaccompanied minors.

"They talk and people literally die," he said. "I had to make a decision on how to deal with that - the country was being impacted."

Perry met with President Obama to speak about the need to secure to border, but his warnings seemed to fall on deaf ears: "It became abundantly clear to me he was not going to address this issue."

That's when Texas took matters into its own hands. The governor increased law enforcement presence on the border, including deploying the National Guard. Since then, Texas has had a 74 percent decrease in apprehensions.

In other words, give Texas the resources, and it can secure the border.

Perry also touched on the growing national debt and uncertainty of millennials' future with the overbearing amount of student loans, yet ended with a positive message.

"I've never been more certain that America's best days remain in front of us," he said, with ingenuity and idealism of the American people being "too durable to be confused by this administration."

"We had a Great Depression - we even survived Jimmy Carter," he said. "We will survive the Obama years too."