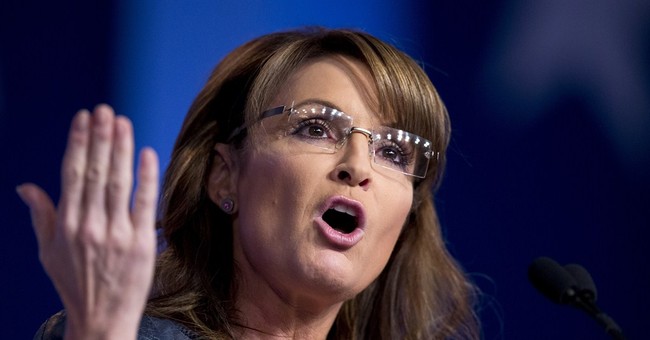 Sarah Palin loves dogs. On Facebook, she said that her pets get ‘loved and spoiled.’ Yet, after she posted a 'controversial' photo that evoked the wrath of PETA, you’d think the former governor of Alaska was worse than Michael Vick.

This week, Palin posted a picture of her son Trig stepping on their Labrador retriever, Jill Hadassah, in an effort to reach their kitchen sink so he could help his mommy wash the dishes. PETA was unimpressed with Palin’s sweet message, instead lashing out at her for the photo:

"It's odd that anyone -- let alone a mother -- would find it appropriate to post such a thing, with no apparent sympathy for the dog in the photo," the organization said. "Then again, PETA, along with everyone else, is used to the hard-hearted, seeming obliviousness of this bizarrely callous woman, who actually thought it appropriate to be filmed while turkeys were being slaughtered right behind her in full view of the camera."

That ‘turkey incident’ they’re referring to is from 2008 when Palin pardoned a turkey as Alaska governor while turkeys were killed in the background. Palin responded by pointing out PETA’s hilarious hypocrisy, specifically in their support of Ellen DeGeneres, who posted this picture on her own Facebook page and President Obama, the latter of whom once admitted to eating a dog:

Did you go as crazy when your heroic Man-of-Your-Lifetime, Barack Obama, revealed he actually enjoyed eating dead dog meat?

Palin also accused PETA of sitting on leather couches and supporting celebrities who ride in leather-seated limos and eat at sushi bars, which is clearly counterproductive to their supposed mission.

PETA apparently wanted the last word. They came up with their own 'bizarre’ response, ranting about pleather and 'vegan caviar:'

"We're a vegan organization, so we sit on pleather couches, wear stylish vegan kicks, and consider fish friends, not food. (Also, by the way, we just sent a case of vegan caviar to Vladimir Putin -- and no, you can't see his house from yours, Ms. Palin.)

Notice how PETA avoided offering an explanation of their hypocritical support of DeGeneres and President Obama? Yeah, that’s because there isn’t one.

What a shame PETA is trying to taint what looks like a special bond between Trig and his dog. This sweet little boy struggles with Down syndrome - no doubt his dog is a source of comfort. If only PETA had as much respect for him as his furry friend.