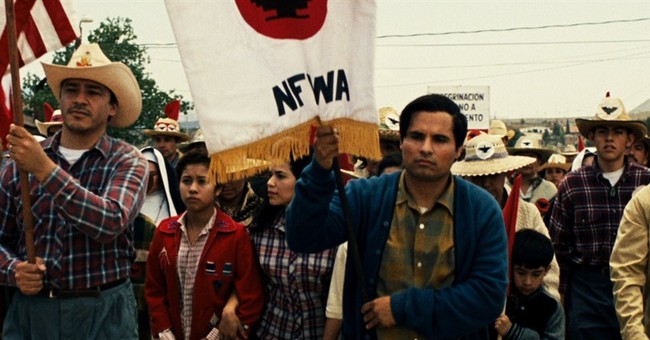 Cesar Chavez was a farm worker and labor leader who co-founded the United Farm Workers labor movement. He led a grape boycott in 1965 to protest poor pay and work conditions. Some people, like President Obama, hail Cesar Chavez as a hero for “giving voice to the poor and disenfranchised workers.” Others call him a radical. It’s not hard to guess which side the New York Times is taking.

In his movie review for the new film "Cesar Chavez," out in theaters today, the Times’ A.O. Scott was not completely thrilled with the film -- not because of its lack of direction or poor acting, but seemingly because it didn’t do the main character justice:

“Cesar Chavez,” directed by Diego Luna, is a well-cast, well-intentioned movie that falls into the trap that often awaits film biographies of brave and widely admired individuals. The movie is so intent on reminding viewers of its subject’s heroism that it struggles to make him an interesting, three-dimensional person.”

What Scott omits in his review, however, is that the ‘brave’ Chavez spent six years studying at the “Alinsky School of Revolution” in Chicago. Saul Alinsky, for those who don’t know, was a community organizer who wrote the infamous Rules for Radicals, a book intended to encouraged people to organize and effect change, and which he disturbingly dedicated to Lucifer.

But, the Times didn't seem to mind that connection. Despite Scott's mild criticism of the film, he did appreciate the movie’s commitment to organized labor:

And if you read between the lines of Mr. Luna’s earnest, clumsy film, you find not just a history lesson but an argument. The success of the farm workers depended on the strength of labor unions, both in the United States and overseas, and the existence of political parties able to draw on that power. What the film struggles to depict, committed as it is to the conventions of hagiography, is the long and complex work of organizing people to defend their own interests. You are invited to admire what Cesar Chavez did, but it may be more vital to understand how he did it.

Soon, Cesar himself is relegated to the background as prominent liberal figures like Robert Kennedy visit CA, give speeches and hold hearings which echo many modern progressive talking points. The film also goes out of its way to repeatedly mock then-Gov. Ronald Reagan, portraying him as an incompetent fool. At one point, he's shown eating grapes and edited in a way to make him appear "the greatest hypocrite to the working man."

My advice: Pull a Chavez and boycott this film.