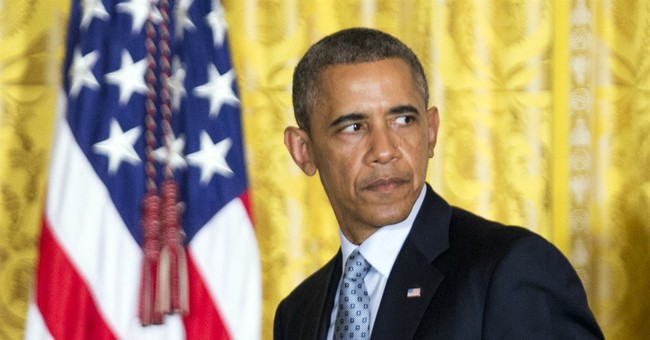 President Obama will be in Texas today for a series of fundraisers but, despite warnings from fellow Democrats that he can't ignore the issue, he will not visit the Mexican border where a humanitarian crisis of his own making is unfolding.

Obama's reluctance to visit the border is completely understandable. The flood of migrants coming from Central America are only responding to the incentives created by Obama's selective enforcement of immigration laws. There is no misinformation campaign. The rumors are true.

Families who come to the border from countries other than Mexico are being helped across the border by U.S. immigration officials and then released, sometimes even transported, deep into the United States. Once they have been released with a piece of paper asking them to show up in court at a later date (a piece of paper the migrants are calling a permiso) these migrants are free to disappear without any threat of future deportation. It is the Obama administration's written policy not to track down non-violent illegal immigrants.

"If you are a run-of-the-mill immigrant here illegally, your odds of getting deported are close to zero — it's just highly unlikely to happen," John Sandweg, Obama's former acting director of Immigration and Customs Enforcement, recently told The Los Angeles Times.

Amnesty activists are thrilled with this outcome. Obama's selective enforcement of immigration law has created a de facto open border.

None of the money asked for by Obama would in anyway stop the migrant wave. Giving Obama $3.7 billion for immigration "enforcement" would be like throwing gasoline on a fire. This is a policy problem not a resources problem. And Obama's base won't let him fix the policy problem.

When Obama first floated the idea of extra funds for the current migrant crisis, he also asked Congress to change a 2008 law that directs immigration officials turn over migrants from countries over than Mexico to HHS for human trafficking processing.

But after fierce opposition from amnesty activists, Obama changed course and dropped the requested change in policy from his $3.7 billion wish list.

Now Obama is completely beholden to the amnesty activists that helped elect him. After Obama failed to pass immigration reform with a Democratic House in his first year in office, as he promised to do, Obama knew he needed to do something by himself. Hence his 2012 Deferred Action for Childhood Arrivals program which unilaterally changed immigration law to match DREAM Act legislation which never passed Congress.

Obama has defended DACA as a completely legal extension of his inherent executive enforcement powers. But if DACA is legal, if Obama can create a brand new program out of thin air that grants work permits and drivers licenses to illegal immigrants, then he can also completely ignore all other immigration laws.

Amnesty activists know this. They know that once Obama announced DACA, the only limit to Obama's immigration powers are political. And they believe Americans are ready for open borders. Politico reports this morning (hat tip Greg Sargent):

Adding to the elevated hopes about what Obama will do is the feeling among Democratic strategists that immigration reform is a clear political winner: The people who will be opposed to reform or to the president taking action on his own are already likely prime Republican base voters. But voters whom Obama might be able to activate, both among immigrant communities and progressives overall who see this issue as a touchstone, are exactly the ones that Democrats are hoping will be there to counter a midterm year in which the map and historical trends favor GOP turnout.

In many competitive House districts and several of the Senate races that Democrats need to hold onto to have a chance of retaining the majority — Colorado and Iowa, and to a lesser extent, North Carolina and Arkansas — immigrant communities make up a significant bloc of votes. Done in a way that energizes Latinos and Asians, Obama’s taking the lead on immigration could prove a margin-making move for the midterms.

It is not clear, however, if Obama believes open borders will be the same hit with the American people that amnesty activists think it will be. Up till now Americans have voiced support for granting amnesty to those already in the country, but keeping out further waves if illegal immigrants.

But the current migrant crisis has exploded the amnesty lie. Americans are seeing first hand that amnesties only beget more amnesties. The only way for Obama to end the crisis is to start treating all migrants the way Mexican migrants are treated: by turning them away from the border.

But Obama's base won't let him do that.

So the crisis on the border will continue, more migrants will come to the United States, and Obama will continue to facilitate their entry into the country. Until there is a strong signal that Americans will not tolerate this politically, the status quo will not change.