Boehner vs Obama: What Will the House Challenge the President On? 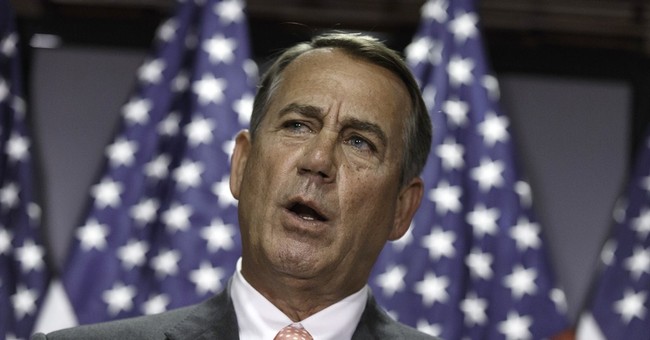 Speaker John Boehner (R-OH) may have announced his intention to sue President Obama over his refusal to faithfully execute his oath of office last week, but Boehner has also been vague about which specific executive action he plans to challenge Obama on.

"On one matter after another during his presidency," Boehner wrote in a memo to fellow Republicans, "President Obama has circumvented the Congress through executive action, creating his own laws and excusing himself from executing statutes he is sworn to enforce - at times even boasting about his willingness to do it, as if daring the America people to stop him. On matters ranging from health care and energy to foreign policy and education, President Obama has repeatedly run an end-around on the American people and their elected legislators, straining the boundaries of the solemn oath he took on Inauguration Day."

But federal courts do not allow anyone, even the House of Representatives, to sue the president over some vague sense of executive overreach. Article III of the Constitution requires that plaintiffs identify a specific "case or controversy" before a federal court can hear their case.

So which specific Obama executive action will Boehner choose to sue Obama over? Clues can be found in the testimony submitted to the House Judiciary Committee this February by Florida International University law professor Elizabeth Price Foley.

"I believe Congress would have standing to sue the President for failure of his faithful execution duty," Foley wrote, "provided such a lawsuit is carefully circumscribed to satisfy a four-part test." Foley's test includes:

(1) Explicit legislative authorization: The lawsuit should be explicitly authorized by a majority of the House. It cannot be a "sore loser" suit initiated by an ad hoc, disgruntled group of legislators.

(3) No political "self-help" available: The lawsuit should target presidential action that cannot be remedied by a simple repeal of the law.

The first thing to notice about this test, is that it will require the House of Representatives to identify the issue they plan to sue over, and affirmatively vote to sue Obama over that issue, before Boehner can even file his lawsuit.

Second, the issue must be one where no one is obviously harmed by Obama's refusal to follow the law. This means that all of Obama's EPA actions are not likely to be pursued because there is almost always a utility company or land owner who can prove they will be harmed by Obama's actions.

So what are some of the other candidates where "no political self-help" is available and the House's legislative power has been "nullified"?

Imagine, for example, that Congress passes a law that says that "[a]ny alien. . . shall . . . be removed" if the alien was inadmissible at the time of entry into the U.S. Then imagine that the President declares that, as a matter of policy that cannot be plausibly characterized as an exercise of law enforcement discretion, a large category of illegal immigrants may obtain deferral of deportation and obtain employment authorization to remain in the country indefinitely.

Imagine further that this executive suspension of immigration law is virtually identical to legislative reform proposals that had been debated extensively by Congress, but ultimately rejected. Under such circumstances, is there any doubt that: (1) congressional power to define the contours of amnesty has been severely curtailed; (2) existing immigration law—mandating deportation for those who entered the country illegally—has been nullified; and (3) congressional rejection of amnesty for such individuals also has been nullified?

While the legal case for suing Obama over DACA may be strong, I highly doubt someone as sympathetic to immigration reform as Boehner would choose that issue to sue Obama over. Instead I'd bet on two other possibilities.

1) Obama's No Child Left Behind rewrite. Covered in more detail here, Obama essentially rewrote President Bush's NCLB law in 2011 to match his own Race to the Top education policies whose own legal authority had expired with the end of the stimulus program. Obama is currently using his rewritten version of NCLB to force Common Core curriculum on schools nationwide. Given the bipartisan opposition to elements of Race to the Top and Common Core, this would be a definite possibility.

2) The Obamacare employer mandate delay. Also covered in more detail here, Obama's decision not to enforce the job killing employer mandate to buy health insurance is exactly the kind of "benevolent suspension" of the law this novel theory of congressional standing was designed to counteract. This issue would rile up the Republican base and put an almost universally despised policy on trial.