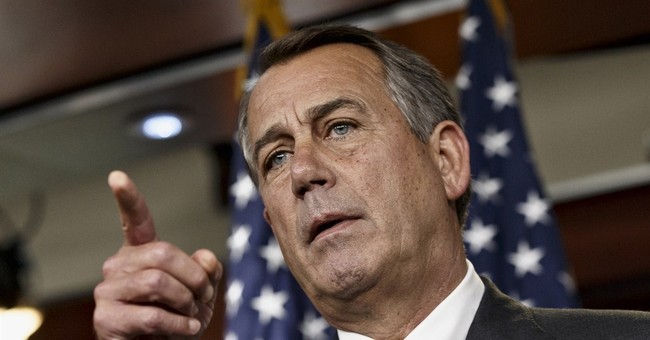 Speaking to reporters on Wednesday, House Speaker John Boehner announced he will be filing a lawsuit in the coming days against the White House in an effort to stop President Obama's continuing executive overreach.

"This is not about impeachment -- it's about him faithfully executing the laws of this country," Boehner said during the announcement.

The lawsuit could set up a significant test of constitutional checks and balances, with the legislative branch suing the executive branch for ignoring its mandates, and the judiciary branch deciding the outcome.

Boehner told the House Republican Conference during a closed-door meeting Tuesday morning that he has been consulting with legal scholars and plans to unveil his next steps this week or next, according to sources in the room.

Boehner spokesman Michael Steel said further action is necessary because the Senate has not taken up bills passed by the House targeting executive actions. The House has passed a bill expediting court consideration of House resolutions starting lawsuits targeting executive overreach and another mandating that the attorney general notify Congress when the administration decides to take executive action outside of what has been authorized by Congress.

“The president has a clear record of ignoring the American people’s elected representatives and exceeding his constitutional authority, which has dangerous implications for both our system of government and our economy,” Steel said. “The House has passed legislation to address this, but it has gone nowhere in the Democratic-controlled Senate, so we are examining other options.”

President Obama has not been shy about his contempt for Congress. His most recent proclamation included his announcement that he has a pen and a phone that he'll use in whatever ways he can to push through an agenda.