Why the Amnesty Lobby is Freaking Out 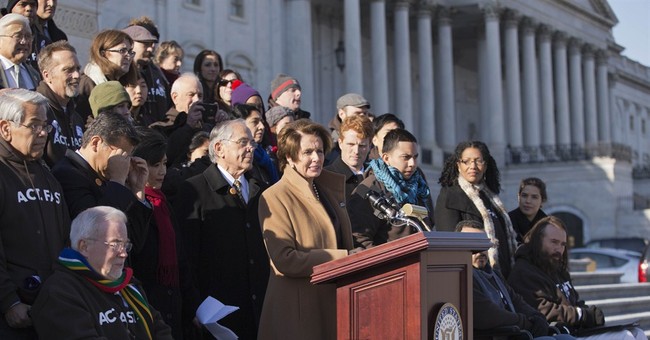 The Congressional Hispanic Caucus is done being patient. There was a time when an Oval Office meeting with President Obama could buy their silence. But no longer.

On Friday April 4, the CHC sent a six-page letter to Department of Homeland Security Secretary Jeh Johnson demanding that Obama use "all legal means available" to "suspend, delay, or dispense with the deportations of immigrants who would qualify for legal status and protection under S. 744."

At no point does the letter bother to call for new legislation or the passage of S.744. Instead, the CHC just demands that Obama enforce current law as if he had already signed S.744. The CHC believes Obama has the same legal authority to do this as he did to enact his June 2012 Deferred Action for Childhood Arrivals.

And the CHC is correct: if DACA is legal, than it would also be legal for Obama to pretend S.744 was the law of the land as well. However, Obama and the CHC begin with a faulty premise: DACA is completely illegal.

Obama has only gotten away with his illegal DACA amnesty because of its limited scope. But the more people who benefit from Obama's illegal amnesties, the more likely someone will gain the standing to challenge them in court.

So why are amnesty advocates suddenly so willing to abandon legislation and go the executive route?

Just look at Sen. Dick Durbin's (D-IL) reaction to an op-ed by Compete America Executive Director Scott Corley calling on House Republicans to pass the SKILLS Act, which would increase the number of H-1B visas the tech community so badly wants.

"I write to ask you to renew your commitment to passing comprehensive immigration reform legislation and to pledge that you will not support stand-alone legislation to increase the H-1B visa cap,” Durbin wrote in a letter to the CEOs of Accenture, Amazon, Cisco, Deloitte, Facebook, Google, IBM, Intel, Microsoft and Oracle.

"I am troubled by recent statements suggesting that some in the technology industry may shift their focus to passage of stand-alone legislation that would only resolve the industry's concerns," Durbin continued. "This 'divide and conquer' approach destroys the delicate political balance achieved in our bipartisan bill and calls into question the good faith of those who would sacrifice millions of lives for H-1B relief." (emphasis added)

So basically Durbin and the Democrats are now calling Google, Facebook, Amazon, et al murderers if they support standalone legislation that would allow more high-tech workers into the country.

But even if the House did pass a standalone H-1B bill, Majority Leader Harry Reid (D-NV) would never allow a vote on it. So why bother with the murder accusations?

Because amnesty advocates know that there is a very real chance Reid will not be majority leader next year. And if Republicans control the Senate, then the odds of piecemeal immigration reform that does not include the same broad amnesty of S.744 goes up substantially.

That is why amnesty advocates are freaking out now. They know that if Democrats lose the Senate this November, they'll be cut out of the debate entirely.