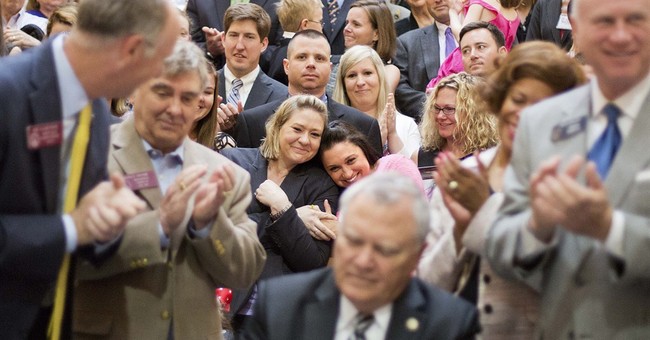 The bill was dubbed "Haleigh's Hope Act," after a five-year-old Georgian named Haleigh Cox, who suffers from a seizure disorder that used to cause hundreds of seizures a day that did not respond to conventional drugs. Haleigh's parents were told last year that marijuana may be effective in treating her illness, but that it was not able to be prescribed in Georgia. When Haleigh's parents were informed she may only have months to live, they packed up and moved to Colorado as a last-ditch effort to save their daughter's life. Since the move and subsequent regiment of cannabis oil treatments, she has far fewer seizures and has begun talking once again.

House Bill 1, which took effect immediately, makes it legal for people who suffer from cancer, sickle cell disease and other illnesses to possess up to 20 ounces of cannabis oil if a physician signs off. The state estimates hundreds of thousands of residents could be eligible for the drug, and at least 17 Georgia families have had to temporarily move to places like Colorado where the cannabis oil is legal.

The oil cannot contain more than five percent THC, the compound that causes the "high" associated with smoking marijuana. The average THC content of marijuana is 13 percent.

Despite the law, significant hurdles remain for patients who want to be treated with cannabis oil. It is currently illegal on a federal level to possess the oil, and it is illegal to grow or purchase marijuana in Georgia.

Georgia must now set up a permitting system for physicians and patients in order to distribute and prescribe cannabis oil.