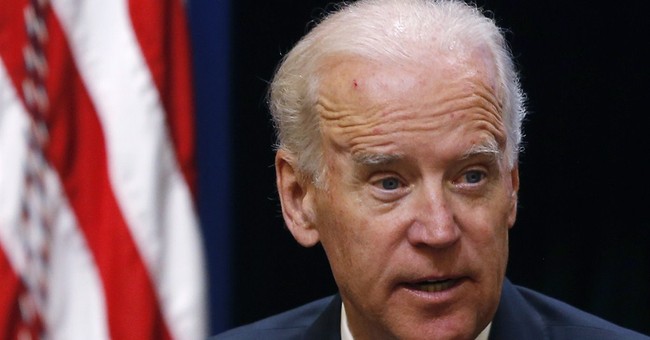 Poor Joe Biden's granddaughters. While the rest of the country has granted women full rights as citizens to vote, drive cars, own property, sign documents, play sports, etc., apparently these unfortunate girls are stuck in the 19th century.

"I will not rest until my granddaughters have every single right my son & my grandsons have." -VP #WomensEqualityDay pic.twitter.com/QyLQojYpTd

Biden did not elaborate further as to which rights his granddaughters lack compared to his grandsons.

As our friends at Twitchy pointed out, quite a few CEOs are women—as is a fifth of the U.S. Senate—and the next president of the United States could quite likely be a woman. But none of that applies to the Biden granddaughters, apparently.

As the proud granddaughter of a stonemason and a hardware store owner, I can't really say that I have any fewer rights than my little brother. Granted, my grandfathers weren't former senators or vice presidents or college educated, so I may be a tad privileged when I'm making this claim compared to Biden's granddaughters. Anyhow, as a female growing up in the United States, I've had basically every opportunity open to me. I can vote and be elected to public office. I'm not required by law to cover my hair or face. I don't have to dress in disguise as a male to see a sporting event. I'm not at risk of having my genitals mutilated, and gendercide of females is not accepted nor encouraged in this country. I wasn't forced to study a "traditionally female" subject in college. I didn't have to worry about being kidnapped by militants who don't believe in educating girls when I was in elementary school. If I eventually marry, have children and decide to stay at home with them, it will be my choice to do so, not a legal requirement nor a societal expectation. These are all actual issues that women face in different countries. What, pray tell, am I missing here that I somehow do not have access to in the United States due to my chromosomal makeup?

American women, such as myself and Biden's granddaughters, have it better than just about every other woman in the world. To suggest that somehow we are disadvantaged due to our genders or that we're lacking in rights compared to our brothers is flat out wrong. Biden needs to remove himself from the 1800s and rejoin the 21st century.

Biden wants to lessen our reliance on a nuclear deterrent
Hotair
No, Ginsburg Didn’t Want Us To Wait; She Was Disappointed She Couldn’t
Redstate