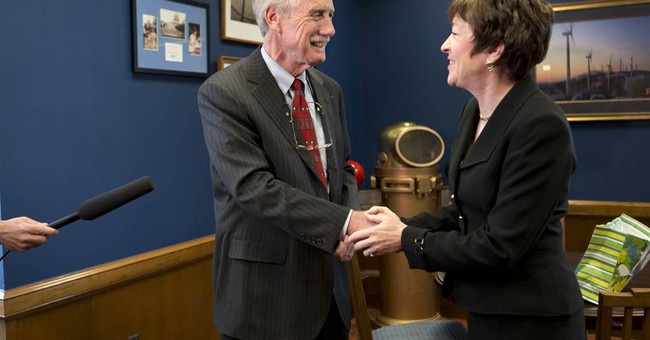 Sen. Angus King (I-ME), an independent who caucuses with the Democrats, today endorsed Sen. Susan Collins (R-ME) for re-election over Democrat challenger Shenna Bellows. Earlier this year, King toyed with the idea of caucusing with the Republicans in the Senate if they won a majority of the seats in the 2014 elections.

Collins received the lowest score of any Senate Republican by the American Conservative Union's annual rating of congress. Collins remains popular in Maine and had a 36-point lead over Bellows in recent polls.

King, who defeated Collins in the 1994 Maine gubernatorial election, referred to her as the "Senate MVP" in a statement to the Associated Press.

"I think she's one of the Senate's MVPs — smart, tough, and always willing to listen. In my book, she's a model senator and I'm delighted to support her re-election."

King also praised Collins' work ethic and willingness to cross party lines for the betterment of her constituents.

Collins does not face a primary challenge in Maine's upcoming election on June 10.