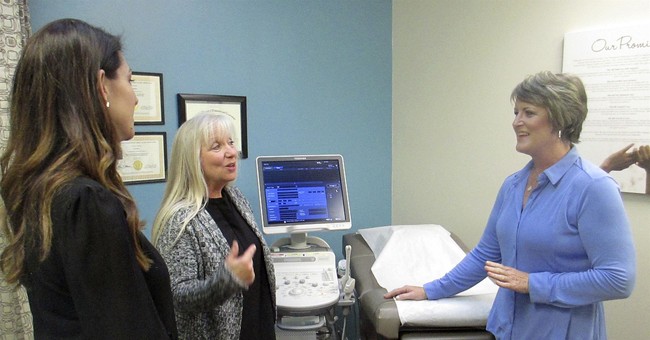 The Trump administration announced Friday that it is awarding a $1.7 million family planning grant to a California crisis pregnancy center chain. The group of pro-life centers does not offer contraception, and opposes abortion. The administration will also simultaneously be cutting government funding that currently goes to Planned Parenthood.

The Hill reports that the Obria Group will be receiving the grant. The decision reflects the Trump administration’s desire to move family planning funds toward faith based groups, and away from abortion providers like Planned Parenthood.

“Many women want the opportunity to visit a professional, comprehensive health care facility--not an abortion clinic--for their health care needs; this grant will give them that choice,” Kathleen Eaton Bravo, founder and CEO of the Obria Group, said in a statement.

Obria will reportedly oversee the work of seven clinic partners, spread across four California counties, including three affiliates that don’t provide contraceptives or perform abortions. Of the other four clinics under Obria's oversight, two will provide contraceptives, but won't be allowed to use Title X family planning grant program funds to pay for it, a spokesperson said.

"None of the funds under this grant going to the subrecipients can be used for contraceptive drugs and devices," the spokesperson said.

A spokesperson for HHS said the Obria Group will be getting $1.7 million this year and, along with additional Title X providers, will receive the funds through 2022 based on availability, grant compliance, and the project’s progress.

Abortion advocates are not happy about the apparent change in direction and subsequent loss of funding, when it comes to family planning. In a statement on Friday, Planned Parenthood president Dr. Leana Wen criticized the move, and vowed to fight back against the administration’s decision to remove funding from America’s largest abortion provider.

“This latest Trump-Pence administration’s attack on health care affects the ability of 40,000 patients to receive cancer screenings, birth control, STI tests, and other crucial primary and preventive health services,” said Wen. “From the beginning, the administration has made clear it wants to dismantle the Title X program by forcing out trusted health centers that provide evidence-based, comprehensive reproductive health care.”

“Planned Parenthood will not let this stand,” continued Wen. “Just as we are fighting the Trump-Pence administration’s unethical, illegal, and harmful Title X gag rule, we will be fighting through every avenue to protect patients’ rights and every person’s ability to access health care.”

Julie Rabinovitz is president and CEO of Essential Access Health, which is projected to receive $21 million in 2019 to provide family planning services in California. Rabinovitz said she is concerned about Obria entering the program because the group doesn’t provide a comprehensive range of contraception options.

“We’re very concerned that by Obria entering into the program, they’re denying women information about all their health care options,” Rabinovitz said. “It could really reduce the progress we’ve made in reducing unintended pregnancies.”