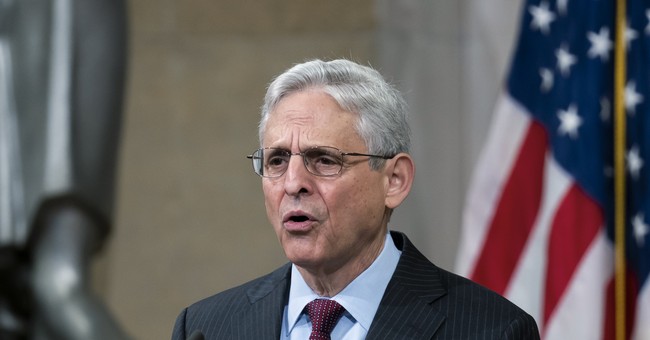 A government insider is blowing the whistle on what the FBI is doing to comply with an October 4th directive — covered by Townhall here — from the Biden administration requiring federal agents to come up with a plan to monitor harassment of or threats against school board members, administrators, teachers, and support staff.

A letter from House Judiciary Committee Ranking Member Rep. Jim Jordan (R-OH) calling out Biden's Attorney General Merrick Garland outlines the documents turned over by the whistleblower and demands answers from the DOJ about a new "threat tag" being used to track parents.

"The email... referenced your October 4 directive to the FBI to address school board threats and notified FBI personnel about a new "threat tag" created by the Counterterrorism and Criminal Divisions," writes Jordan. "The email directed FBI personnel to apply this new threat tag to all 'investigations and assessments of threats specifically directed against school board administrations, board members, teachers, and staff.'"

As Jordan's letter continues, "The email articulated the purpose as 'scop[ing] this threat on a national level and provid[ing] an opportunity for comprehensive analysis of the threat picture for effective engagement with law enforcement partners at all levels.'"

The email, also tweeted out by Republicans on the House Judiciary Committee, is pretty clear in its purpose, as Rep. Jordan highlighted in his letter to Attorney General Garland. A new threat tag — "EDUOFFICIALS" — should be used to track investigations and assessments. One of the requests accompanying the guidance on the threat tag is that "when evaluating potential threats" agents are to "attempt to identify the following: a) Is there a federal nexus? b) Are there potential federal violations that can be investigated and charged? c) What's the motivation behind the criminal activity?"

So parents who show up at their local school board meeting, write a letter to administrators, or send an email to their child's teacher could now end up tagged as a threat in the FBI's database if their words or actions are deemed to be threatening, harassing, or intimidating — apparently even if there aren't any federal violations that can be investigated or charged.

For their part, the FBI claimed in a statement provided to The Wall Street Journal on Tuesday that applying a threat tag to an individual or an incident doesn't necessarily mean an investigation will be opened into the person or situation.

The FBI described a threat tag as a tool to compile statistics & track info about a range of issues. “The creation of a threat tag in no way changes the long-standing requirements for opening an investigation, nor does it represent a shift in how the FBI prioritizes threat."

The FBI also claimed that it's "never been in the business of investigating parents who speak out," but the Biden administration's directive seems to contradict that as a parent who speaks out in a way that some bureaucrat says is threatening, harassing, or intimidating, could in fact find themselves receiving a threat tag.

And the FBI says it has "never been in the business of investigating parents who speak out or policing speech at school board meetings, and we are not going to start now. We are fully committed to preserving and protecting First Amendment rights, including freedom of speech.”

Rep. Jim Jordan (R-OH) also pointed out that Attorney General Merrick Garland claimed in testimony that the FBI wouldn't target parents as a result of his directive to look into the conflicts happening between school officials and parents.

If getting slapped with a "threat tag" by the FBI doesn't mean parents are being targeted, Garland definitely needs to explain how that works.

"The American people deserve a full accounting of exactly who was involved, and when – so that egregious overreach like this may be prevented in the future," Neily added.